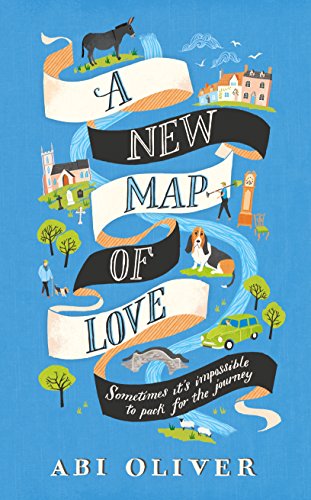 A New Map of Love is a lovely, gentle read following George Baxter as he comes to terms with the death of his wife. They had been married for 26 years but it is only now that she has died that he realises that their marriage had perhaps become rather too comfortable. Although filled with feelings of guilt, he starts to feel that he does not want any more of his life to simply drift by. Most of all he wants to find a soulmate, the true soulmate which he feels his late wife wasn’t. There certainly seems to be no shortage of candidates!

George was an endearing character who put me in mind of Rachel Joyce’s Harold Fry. He is a decent, hard-working man running his own antiques business and trying to do his best for all his employees. At first, I got the sense of his being older than he actually was, especially when he referred to his wife as ‘old Win’. However, he was only 56 which these days is nothing, but perhaps in the 1960s when this book is set, he would have been considered older. I would say he was a true gentleman but sometimes his thoughts were far from gentlemanly! I would love to have known from Win what she thought of their marriage and whether she had been contented or not but this, of course, was not to be and was something George also wondered about.

It is the characters which made this book so enjoyable for me from George himself, to his wife’s friends who he dubs ‘the cronies’, widowed Sylvia who I couldn’t help but wonder if she was all she seemed, pompous Lady Byngh, eager young worker Kevin who got so excited at auctions, wise and dependable Vera as she moved from housekeeper to more valued employee and not forgetting his beagle dog, liquorice-allsort-loving Monty. This varied cast of characters are all portrayed so well and combine to make this book a delightful depiction of English country life.

Add in some mystery regarding George’s past, the hunt for an elusive antique, various women who see George as quite a catch, not a small dash of warm humour and you have all the ingredients for a quietly compelling story. A New Map of Love is a charming and uplifting read.

How can you pack for the journey of a lifetime?

George Baxter has settled for a comfortable life, content as the years unfold predictably – until Win, his wife of twenty-six years, dies.

With his loyal dog Monty by his side, George throws himself into his work as an antiques dealer. His business is at the heart of the village and all sorts pass through the doors, each person in search of their own little piece of history.

When George meets local widow Sylvia Newsome, he imagines a different kind of future. But life has more revelations to offer him. Over the course of an English summer George uncovers some unexpected mysteries from his past, which could shape his tomorrows . . .

Abi Oliver has spent much of her life in the Thames Valley. She studied at Oxford and London Universities, has worked for a charity, on Indian Railways, as a nurse and as a writer. She has also raised four children and lives in Purley-on-Thames. This is her first novel as Abi Oliver.