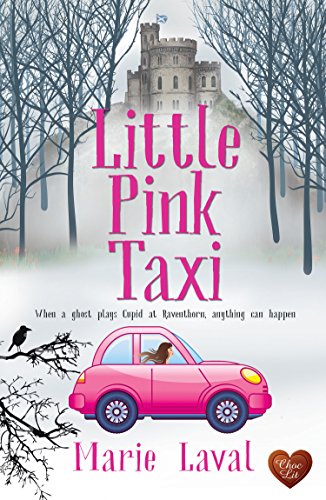 Little Pink Taxi by Marie Laval is a book I’ve been seeing a lot on social media recently and it has certainly been getting lots of great reviews. I’ve not managed to get around to reading it just yet but have an extract from the book to whet your appetite.  Little Pink Taxi is Marie’s second contemporary romance and if it’s a book you like the sound of too, you can order a copy online here. At the time of writing it’s only 99p, so why not treat yourself?

Take a ride with Love Taxis, the cab company with a Heart …
Rosalie Heart is a well-known face in Irlwick – well, if you drive a bright pink taxi and your signature style is a pink anorak, you’re going to draw a bit of attention! But Rosalie’s company Love Taxis is more than just a gimmick – for many people in the remote Scottish village, it’s a lifeline.

Which is something that Marc Petersen will never understand. Marc’s ruthless approach to business doesn’t extend to pink taxi companies running at a loss. When he arrives in Irlwick to see to a new acquisition – Raventhorn, a rundown castle – it’s apparent he poses a threat to Rosalie’s entire existence; not just her business, but her childhood home too.

On the face of it Marc and Rosalie should loathe each other, but what they didn’t count on was somebody playing cupid …

Now read on for an excerpt from the book

She touched the antique radiator under the bow window. It was lukewarm, as usual. ‘There are logs in the basket if you fancy making a fire. If not, just turn up the radiator. It’s a bit temperamental but should heat up. Eventually.’

He looked around, clearly unimpressed. ‘It’s rather old-fashioned.’

‘Old-fashioned?’ she cried out, instantly forgetting that she’d always disliked the room. ‘Every single piece of furniture is steeped in history. The chest of drawers and the wardrobe are Queen Anne. These oil paintings over there are originals by George Blackie Sticks and Edwin Landseer.’

‘Hmm … What happened to the bed?’ He pointed to the markings on the posts. ‘These dents look like they were made by claws.’

She shrugged. ‘There were made by knives.’

Her face hot, she turned round and busied herself rearranging the cushions on the bed.

‘Has there been some kind of accident?’ he prompted.

Rosalie sighed. ‘No … That bed is special. Most of the McBrides since the late fifteenth century, as well as countless babies from surrounding villages, were conceived here.’

‘So there’s a notch for every baby.’ He faced her, hands pushed deep in his trouser pockets, eyebrows arched.

She cleared her throat. ‘Sort of. Do you remember Isobel McBride, the woman you saw in Corby Woods tonight? Well, she had some old wizard cast a spell on the bed before her nuptials to make sure her betrothed could …’ She swallowed hard.

She fussed over the cushions again. ‘Perform.’

‘Ah.’ He smiled, but it was so brief she thought she’d imagined it.

‘Over the years, this bed has proved a steady source of income for the McBrides. Any man whose virility was in need of a little … push could bring his wife here for a fee – a jar of whisky, a brace of pheasants, a good-sized salmon. Every mark on the bedposts represents a successful night.’

She rearranged the cushions for the third time. ‘When he inherited the castle from his uncle, Geoff carried on with the tradition. We organise weddings here now, and people come a long way to … ahem … stay, in this bed.’

‘I’d be curious to read how you phrase your adverts,’ he said.

Was it her imagination or were his lips twitching again?

‘We don’t need to advertise. In fact, Geoff doesn’t do any advertising. He can’t stand the press, and never allows photographers on the grounds. We get most of our guests from word of mouth.’

She gasped as a thought crossed her mind. ‘I hope you’re not offended Lorna gave you this room. It’s not at all because she thought you needed … you know … extra help with …’

She closed her eyes and took a deep breath. She was making a mess of this. ‘What I mean is that you were given this room because it has an en suite and the view over the loch is stunning, that’s all.’

She opened her eyes and found him looking at her, deadly serious. Oh no, he was offended.

Originally from Lyon in France, Marie has lived in the beautiful Rossendale Valley in Lancashire for a number of years. A member of the Romantic Novelists Association and the Society of Authors, she writes contemporary and historical romance. Her native France very much influences her writing, and all her novels have what she likes to call ‘a French twist’!

You can get in touch with Marie on Facebook and Twitter, and why not check the beautiful photos of Scotland and Denmark on the special Little Pink Taxi Page on Pinterest?

3 thoughts on “#Extract from #LittlePinkTaxi by Marie Laval @ChocLitUk @MarieLaval1”