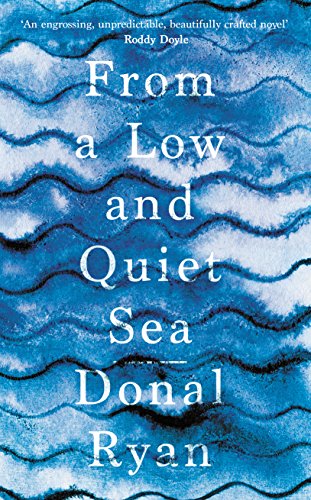 From a Low and Quiet Sea is a book that I’m not sure I quite have the words to do justice to. It is a story about three men living in small town Ireland and is told in four parts.

Firstly we read the devastating story of Farouk, a Syrian refugee.  His words brings vividly to life the reality of the danger and fears faced by those in Syria and gives it a human face. He is just a father like any father, wanting his family to be safe and risking so much to bring his wife and child to safety. Next is young Lampy who is frustrated in love. He was unceremoniously dumped by the girl he loved who perhaps regarded him as not good enough. He lives with his mother and his grandfather who is loud, foul-mouthed and somewhat embarrassing. He has never known his father. The final character is John who through an internal monologue is looking back over his life, recognising the wrongs he has done, a confession if you like. His older brother died suddenly when young and was put on pedestal that he felt he could not live up to. This loss coloured his life and influenced the person he became and the choices he made.

The three stories were all equally compelling, relating just enough to keep the reader’s attention yet leaving a sense of wanting to know more. What links these three men is a sense of loss and the final part of the book brings their stories together in a most unexpected way. It has one of the most touching endings I’ve read in a novel, which really tugged at the emotions. The ending changed my view of one the characters who was finally able to express love. This is a book I feel I need to read again to get a deeper understanding of each character knowing what I learned from the ending.

From a Low and Quiet Sea is an epic read in a slim but powerful and beautifully crafted book.

My thanks to Anne Cater for asking me to take part in the blogtour and for my review copy. From a Low and Quiet Sea will be published on Thursday 22nd March on hardback and ebook format, with the paperback to follow in July. It will be available from all good book retailers or you can order a copy online here: From a Low and Quiet Sea

Farouk’s country has been torn apart by war.

Lampy’s heart has been laid waste by Chloe.

John’s past torments him as he nears his end.

The refugee. The dreamer. The penitent. From war-torn Syria to small-town Ireland, three men, scarred by all they have loved and lost, are searching for some version of home. Each is drawn towards a powerful reckoning, one that will bring them together in the most unexpected of ways.

Donal Ryan is from Nenagh in County Tipperary. His first two novels, The Spinning Heart and The Thing About December, and his short story collection A Slanting of the Sun, have all been published to major acclaim. The Spinning Heart won the Guardian First Book Award, the EU Prize for Literature (Ireland), and Book of the Year at the Irish Book Awards; it was shortlisted for the International IMPAC Dublin Literary Award; and longlisted for the Man Booker Prize and the Desmond Elliott Prize. The Thing About December was shortlisted for the Kerry Group Irish Novel of the Year and Novel of the Year at the Irish Book Awards, and the title story of A Slanting of the Sun won the writing.ie Short Story of the Year at the Irish Book Awards. His third novel, All We Shall Know, will be published in autumn 2016. Donal holds a Writing Fellowship at the University of Limerick. He lives with his wife Anne Marie and their two children just outside Limerick City.