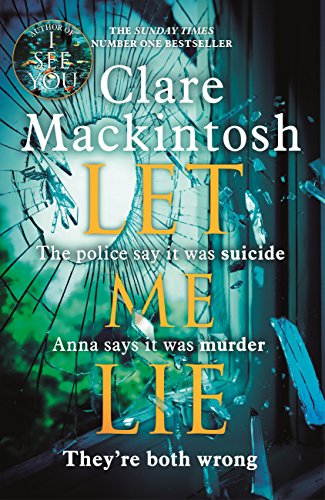 Let Me Lie is another superb psychological thriller from Clare Mackintosh, easily on a par with her first two novels and perhaps even better.

Anna is a young mother who in a very short space of time has had her world turned upside down. Her father committed suicide followed just months later by her mother, in what seemed to be a copycat suicide. She met the father of her child soon afterwards and perhaps more quickly than they intended, Ella was born. Now exactly one year after her mother’s death, she receives a card in the post which says simply ‘Suicide? Think again’. Of course, she assumes this message is telling her that her parents were murdered and goes straight to the police. On duty is retired detective Murray Mackenzie, who now works in a civilian role at the station. He knows that this is no evidence at all, but is drawn to the case since his own wife has very fragile mental health and he worries constantly that she is a suicide risk. He decides to quietly carry out his own investigations and pass it on to CID should he think there is anything to the case. He is very much of the old school of police work often relying on gut instinct. “In his experience, if something smelled like a fish and tasted like a fish, it was almost certainly a fish. Even if it didn’t look like one.”

In Anna and Murray, Clare Mackintosh has created two terrific characters who I was completely invested in. The story builds up slowly in first part as you get to know the characters, get a feel for what has happened and begin to wonder about what exactly has happened to Anna’s parents. And then bam – the author hits you with a massive twist! With this author you know there are going to be twists so I don’t think it’s a spoiler to say so. Obviously I’m not going to say what happens but wow I did not see THAT coming! It’s the kind of twist that makes you suddenly have to rethink everything you thought you knew and understood about the story in a completely different way.

Well, I could not read the rest of the book quickly enough, trying to work out what had happened and what would happen. I had my suspicions about one part of the plot (and I was right – so pleased with myself for once!) but there was no way I could have guessed at all of it. Red herrings and suspects abound in this page-turning novel.

With Let Me Lie, Clare Mackintosh shows herself to be Queen of the Plot Twists and Mistress of Misdirection! Don’t miss this fast paced, clever thriller which will keep you guessing right up to the end – and probably surprise you even then.

My thanks to the publishers, Sphere, for my review copy from Netgalley. Let Me Lie is available  now in hardback, audio and e-book formats. You can buy it at any good book retailer or order a copy online here: Let Me Lie

The stunning, twisty new psychological thriller from number one bestseller Clare Mackintosh, author of I LET YOU GO and I SEE YOU.