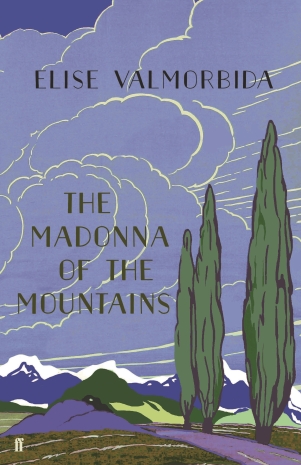 I’m sharing a short extract from Elise Valmorbida’s The Madonna of the Mountains today.  It’s the first novel in Faber’s partnership with Liberty London and is a wonderfully evocative tale of love and survival set in Italy’s Veneto region during WWII. It will be published by Faber in hardback tomorrow, 5th April. You can order a copy directly from Faber here: The Madonna of the Mountains

First of all, more about the book

1923: Maria Vittoria is embroidering a sheet for her dowry trunk.

Her father has gone to find her a husband. He’s taken his mule, a photograph and a pack of food: home-made sopressa sausage, cold polenta, a little flask of wine—no need to take water—the world is full of water.

There are no eligible men in this valley or the next one, and her father will not let her marry just anyone, and now, despite Maria’s years, she is still healthy. Her betrothed will see all that. He’ll be looking for a woman who can do the work.

Maria can do the work. Everyone in the contrà says that.

And the Lord knows Maria will need to be able to work. Fascism blooms as crops ripen, the state craves babies just as the babies cry for food. Maria faces a stoney path, but one she will surely climb to the summit.

In this sumptuous and elegant novel you will taste the bigoli co l’arna, touch the mulberry leaves cut finer than organdie, and feel the strain of one woman attempting to keep her family safe in the most dangerous of times.

Her father has gone to find her a husband. He’s taken his mule, a photograph and a pack of food: homemade sopressa sausage, cold polenta, a little flask of wine – no need to take water – the world is full of water. It’s Springtime, when a betrothal might happen, as sudden as a wild cyclamen from a wet rock, as sweet as a tiny violet fed by melting mountain snow.

Maria Vittoria is embroidering a sheet for her dowry trunk.

Everyone is working hard, making use of the light. Twelve hud­dled households chopping, fixing, hammering, cooking, washing, hoeing, setting traps, pruning vines, stripping and weaving white willow, planting the tough seeds, oats, tobacco, cabbage, onions, peas, and the animals are making their usual racket – but the whole contrà feels wanting without her father. A body without a head.

In his breast pocket he has the only photograph there is of her, made when she was seventeen, together with her sisters, brothers, parents, grandparents. She’s almost unmarriageable now, at twenty-five years old, but she’s strong and healthy and her little sister Egidia says she’s pretty. It’s just bad luck, or God’s will, or destiny, that there are no eligible men in this valley or the next one, just sickly inbreds and hunchbacks and men mutilated by the Austrians. It doesn’t help that the contrà is so hard to get to, so far from the towns. And her father won’t accept the hand of just anyone – he has his name and standing to consider. He owns some property. He is a man of business. He even has notepaper with his name printed on it.

Before the photograph, before the evacuation, Maria had a proposal. The fellow had come all the way from Villafranca, he had documents saying he didn’t have to fight any more, that he’d have a proper pension and special privileges. But he’d lost a finger and an eye.

Who knows what else he’s missing? her father said when he turned the offer down. We can do better than that.

And Mama said what everyone says, all the cousins, all the women: no se rifiuta nessun, gnanca se l’è gobo e storto. Refuse no­body, even if he’s hunchbacked and crooked. And Papà told her to shut up with her stupid sayings.

Maria whispers to herself, imagining a field daisy, pulling off one petal after another.

Elise Valmorbida grew up Italian in Australia, but fell in love with London. She’s a designer, writer and teacher of creative writing. In recent years, she produced a feature film. Her fiction includes Matilde Waltzing, The TV President and The Winding Stick. Her non-fiction includes SAXON – The Making of a Guerrilla Film, and The Book of Happy Endings, now published in four languages and four continents.

Follow the rest of the tour on the following blogs