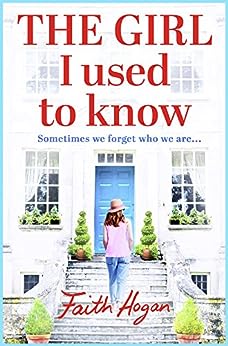 I’m pleased to be part of the blogtour for The Girl I Used to Know by Faith Hogan and have a busy post for you today with a review, a guest post and a giveaway. I read this book last year and thought it was excellent. I’m sharing my review again and wholeheartedly recommend this book. There’s a chance for you to win a signed copy of the book too – details at the bottom of the page.

In The Girl I Used to Know we have two strong female lead characters in Tess Cuffe and Amanda King. These two share a house though not particularly willingly. Tess rents the scruffy basement flat of Amanda and Richard King’s large and immaculate Georgian house in Dublin. The two do not have what you would call a warm relationship since Richard has tried unsuccessfully and at great expense to evict Tess.

On the outside, Amanda appears to have the perfect life. In her 40s, she has two children, a beautifully stylish house, a successful and handsome husband and a group of stylish friends. Yet Amanda is increasingly wondering what happened to her life. She hardly sees her husband as he is constantly at work, her teenage son in particular is turning into a sneering youth with barely disguised contempt, she feels that her life has lost its way and she has lost her sense of who she really is along the way.

Tess is in her 60s, lives alone and appears to delight in being cantankerous. Her health isn’t the best and she has no friends. She didn’t initially seem to be a character who I would warm to she seemed to have very little redeeming characteristics. But with the arrival of Matt on her doorstep (a great addition to the story!) we soon begin to see her softer side.

Through the chapters woven through the book from years gone by, the author shows her readers the girls both Tess and Amanda used to be. I was so intrigued about what had happened in Tess’s life in particular to change her from the optimistic girl moving to Dublin to start at Uni to the grumpy woman, living alone with no enthusiasm for life. Faith Hogan writes movingly and with great insight about how Tess and Amanda’s hopes and dreams slowly ebbed away leaving them both with disappointing realities, and lives they felt trapped in. I loved the way the women blossomed and grew in confidence as they took the first tentative steps towards friendship just as their new keep fit routines saw them taking steps round the square where they lived. The author had just the right balance of insights into the past blended with their present lives to create understanding and empathy with her characters.

A wonderful warm-hearted book about missed opportunities, second chances, friendship and how it’s never too late to have a new adventure and to find love.

One of the most asked questions, when you tell people that you’re a writer is – where do you get your ideas? Most writers will annoy the socks off you with – ideas are everywhere! And, unfortunately, that is very true. However, what they don’t tell you is that while an idea is the seed, the finished product, is often nothing at all like how the book was meant to be.

The Girl I Used To Know began life when I was sitting at a meeting with a lady I know at a local diet club. I went along for moral support and what struck me each week – (apart from being inspired to add new and interesting twists to old dinner ideas) was how many women attend these meetings. I would know some of these women for years and each have their own story, all of them very interesting, but none of them really what I needed for a book! On the other hand, as we attended more meetings, it became very apparent, that it was a place to build relationships. It was a space to share; often details completely unrelated to fighting the good fight came up. One woman talked of her sister’s cancer diagnoses, another of her French mother-in-law who was intent on shovelling as much fresh cream into every dish as she could manage. All of these stories are the fabric of what makes us who we are and while I didn’t want to take and use them, the idea that we find a place to connect like this stuck with me. It was a safe place where women could share and it made me think of how we make friendships as we get a little older. Some people are good at it, while others struggle to reach beyond the tight circle they’ve always had.

I wanted to write a book about second chances, more so than about the idea of re-invention through changing your weight or how you looked. Some of the details in the finished book remain the same, however, much of that book ended up being cut to pieces, with a third voice completely cast aside to make the book a stronger story. My diet club, for as long as it lasted was based in the Swift Centre, on the Georgian square where my characters live. It was a way of bringing them together. I had characters who lived in the same street but inhabited different worlds. The idea of the diet club meant that suddenly, they were sitting next to each other and not just passing on the street, nodding curtly or in the case of some perhaps ignoring completely. Now they had to speak to each other and within the hierarchy of the diet club, they were suddenly on the same level. A weighing scales and BMI report does not judge you on your annual income or the success you’ve made of your life. It seemed to me the perfect central point for all the action.

Books are a funny thing, certainly the writing of them is a constant throwing up of questions and surprises and by the time I had completed a second draft, it seemed the story had outgrown that initial starting point. Another draft and the eagle eye of my agent meant it was all but relegated to the size of a parking space and suddenly, not a very useful one for all the words I had invested in it. Very often, you come to a point, where you hear those words that have been uttered oh so often – all about killing those babies? That point came for me near the very end and although there’s some re-invention, the initial idea that was the birthing pool for The Girl I Used To Know, remains where it belongs, somewhere in the back of my imagination, turning wheels for perhaps another day!

Faith Hogan is an original voice in women’s fiction. Her stories are warm and rooted in a contemporary Irish landscape which has lost none of its wit, charm or emotion thanks to its modern vibe.

Faith was born in Ireland. She gained an Honours Degree in English Literature and Psychology from Dublin City University and a Postgraduate Degree from University College, Galway. She was a winner in the 2014 Irish Writers Centre Novel Fair – an international competition for emerging writers.

Her debut novel ‘My Husbands Wives’ is a contemporary women’s fiction novel set in Dublin, published by Aria Fiction in 2016. Her second novel, ‘Secrets We Keep,’ is published in February 2017 – it has been included on the Netgalley ‘Hot List 2017.’ Her third novel – ‘The Girl I Used To Know’ is out in December 2017.

She is currently working on her next novel. She lives in the west of Ireland with her husband, four children and a rather busy chocolate Labrador. She’s a writer, reader, enthusiastic dog walker and reluctant jogger – except of course when it is raining!