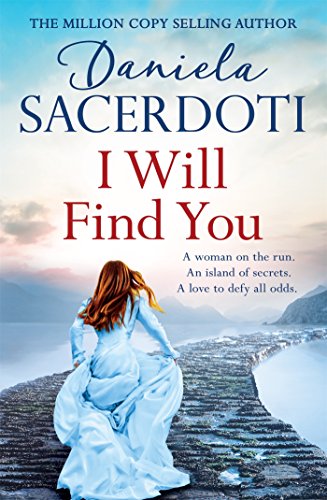 I Will Find You is the second in the Seal Island series but the story stands perfectly well on its own. If you have read the first book, Keep Me Safe, you will spot pleasing references to that story. There is also more than a passing reference to Glen Avich, the setting for many of this author’s other books.

There are two stories running in parallel throughout this book and often mirroring each other. In the present Cora, grieving the death of her mother, discovers a key to an box containing an old photograph of her mother, laughing with a friend in front of an unknown house. She is a very intrigued to learn that her mother owned this isolated cottage on the beautiful Seal Island, off the west coast of Scotland. Cora doesn’t know why, but the photo stirs strong emotions in herself and she feels an emotional connection to the island. When she goes there to investigate more, she finds herself drawn to Innes, the bad boy of the island, badly damaged by his childhood experiences. In the historical strand of the story, Margaret is a servant to Lady Dolina and, despite the difference in their social standings, becomes involved with the Laird’s son, Duncan Innes.

There’s something magical about islands and the author conveys this beautifully again in this book. There is the idea of escape as in many of her books, a simpler way of living, away from the rat race of a busy city. There is also the draw, the pull of and connection to the past. Through the stories, the author suggest we are all more strongly linked to our ancestors than we realise, that the past can shape us in the present. Her characters are drawn to places, to people, to their soulmates who keep meeting and parting. There is a call throughout the years.

This author never disappoints, never fails to provide a book to get completely lost in and usually to emerge from with a satisfied and glad heart. However, this time, I couldn’t help but have a bit of melancholy feeling too, as the history of the lovers, the soulmates, kept repeating itself down through the years. You’ll understand what I mean when you read it but I can’t say too much more without giving things away.  Despite this, it’s a book I recommend for its beautiful island imagery, its love stories and its haunting and atmospheric  writing.

My thanks to the publishers for my review copy from Netgalley and to Jenni Leech for inviting me to be part of the tour. I Will Find You is published by Headline and available as an ebook now, currently only 99p. The paperback will be available later this year. You can order a copy online here: I Will Find You

After her beloved mother dies, Cora is heartbroken. When she discovers her mother has left her a cottage – a crumbling shelter on a remote and beautiful Scottish island – Cora hopes that travelling there will help her feel closer to the person she has lost. The moment she arrives on the wild, windswept island of Seal, Cora instantly falls under its spell. She is drawn to Innes, recently returned to the island to confront his past.

As Cora begins to unravel her mother’s connection to Seal, she learns the island has a dark, turbulent history. She is not the first lonely traveller to have sought refuge at Gealach Cottage. And there may be far more to her attraction to Innes than she could have ever imagined…

Daniela Sacerdoti is a phenomenon. Over one million copies of her novels have been sold in eBook, her debut novel Watch Over Me was the eighth bestselling Kindle book of all time in 2015 and she was also ranked as the eleventh top-selling Kindle author.

Daniela writes beautiful, haunting and bestselling fiction for adults (the Glen Avich series), young adults (the Sarah Midnight trilogy) and children. Her novels have been translated in twelve languages.
Daniela was born and raised in Italy. She studied Classics, then lived in Scotland for fourteen years, where she married and taught in a primary school. Daniela’s children’s book Really WeirdRemovals.Com was shortlisted for the Scottish Children’s Book Awards. She has also written for the BBC.
Daniela, her husband and their two sons make their home in a tiny village in the Alps. To discover more about Daniela and her world, visit http://www.danielasacerdoti.com.