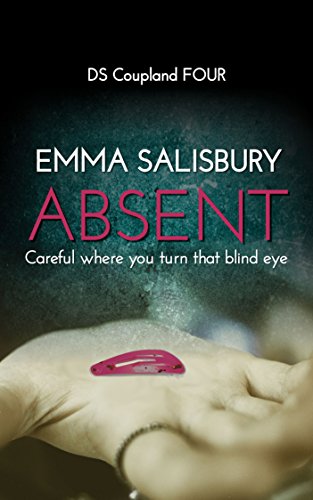 It seems like it’s been a long time since I read the last DS Coupland book but within a few pages it was like he’d never been away. For DS Alex Moreton, it must feel like she’s never been away either on maternity leave as she’s no sooner back than she and Coupland are investigating a gruesome discovery. A young couple moving into a flat find a sports bag left behind by a previous occupant. When they move it, they discover it contains not old sports kit but the decomposing body of a young child.

DS Coupland is exactly the kind of dedicated detective that I hope, and am sure, is out there in the real world. A compassionate man, it’s not just about solving cases for him, it’s about getting justice for victims and closure for families. Despite his tough image, he does allow himself to get emotionally involved in some of the cases. I suppose it must be difficult not to, but it must also be difficult to switch off and leave the cases at the office as it were.

Coupland’s homelife is not exactly going smoothly either with something happening within his family which he is finding very difficult to deal with. I’m not going to say what in case you haven’t read the third book yet, as it will give something away. Suffice to say, it brings back memories of his own childhood and he wonders how he is going to be able to cope.

Coupland, for all his faults, is a fantastic central character though there is plenty of involvement for the rest of the team too in this book. I must admit a soft spot for young and eager DC Timmons, otherwise known as Krispy due to his fondness for a certain company’s doughnuts!

Various themes are explored in the book, including human trafficking. It was sobering to read in the notes at the end that Europol believe that 10,000 children who entered Europe in 2015 have disappeared. Emma Salisbury has put a very human face to those who enter the country often illegally, on false promises, hoping for a better life for their families. The reality of what they face is something very different and brought vividly to life. Another thought provoking part of the book was when the team had to follow up on missing children or children on the social work radar for being at risk. There were so many, and with so many different but heart-breaking stories.

Absent is a solid police procedural which has the perfect balance for me between the actual investigation, the personal lives of the detectives and the workplace interaction between the team, with tensions clear and humour absolutely necessary. It’s a tense and well-paced book which I thoroughly enjoyed and I am looking forward to catching up with Coupland again in the next book.

My thanks to Kelly at Love Books Group Tours for inviting me to take part in the blogtour and to the author for my copy of the book. Absent is available now and you can order a copy from Amazon here: Absent

When he stopped a serial killer in his tracks earlier in the year he thought that would be the end of it, but for DS Kevin Coupland his nightmare has just begun.

A child’s body is discovered hidden in a bag, kicking off a major investigation for Salford Precinct’s murder squad. Soon the National Crime Agency roll into town and Coupland is under strict instructions to play nice.

He’s got enough on his plate to worry about politics. A shock discovery in his personal life is starting to take its toll, causing him to make decisions that bring him to the attention of the powers that be for all the wrong reasons.

DS Alex Moreton returns from maternity leave to find her partner deeply troubled, but with a cold case to review she’s in no position to prevent him hitting the self-destruct button.

As he hunts down the child’s killer Coupland is forced to reflect upon his own life and find an answer to the question he’s been avoiding. Is it possible to accept the things you cannot change?

I write gritty, crime fiction that focuses on the ‘why’dunnit as well as the ‘who’. I worked for a housing association supporting socially excluded men and women with their return into society, which provided me with a lot of inspiration. If you like hard-boiled crime writers Stuart MacBride, Denise Mina AND Ed James then my Scottish crime series is for you. Fans of Ian Rankin or Mark Billingham-style police procedurals should try my Salford detective series. Like living on the edge? Why not try both…

Most evenings I can be found walking the family dog on the beach near our home in East Lothian, Scotland. You can find out more on my website http://www.emmasalisbury.com and I can be found on twitter @emmasauthor.