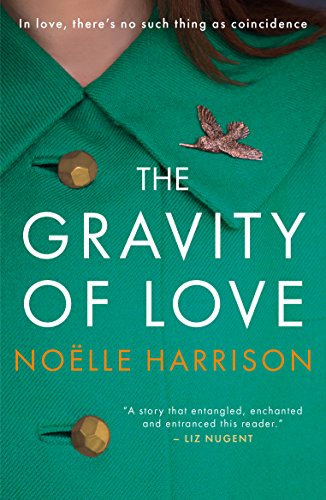 The Gravity of Love is just my kind of book, moving back and forth in time, weaving together the various characters’ stories. Lewis was a young graphic designer having a passionate affair with Marnie in 1960s London. She was also a talented designer but he let her down badly and they parted acrimoniously. Years later, now married to Samantha and living in Arizona, mysterious postcards arrive from Ireland which he knows must be from her.

Joy also lives in Arizona. She married Eddie when she became pregnant at 17. Two children later she is a housewife who has never had the chance to follow her own dreams. She feels like her family doesn’t know her especially when they tear up her beloved garden and replace it as a surprise. On his deathbed, her father revealed she was adopted but her mother won’t talk about it.  All she knows is that her birth mother was Irish. With another revelation in her homelife, she feels even more rootless.

Joy and Lewis meet by chance on several occasions and sense a kindred spirit. Both seem to be searching and yearning for something. The front of the book says “In love, there is no such thing as coincidence.” There are many coincidences throughout the book and yet they all seem very plausible. Coincidences do happen in life and sometimes feel like they are just meant. [As a light-hearted aside, I was reading this book on the prom and heard someone shouting for their dog. The dog was called Marnie, the same name as one of the characters. It’s not exactly a common name for people or pets and I couldn’t help but smile at the coincidence!]

The author has conveyed her settings wonderfully from the dry heat of the Arizona desert, to London in the swinging sixties, to the English home counties in the 1950s where Lewis and his sister Lizzie are passed from one relative to another which had a profound impact on their lives, and finally to a wet and stormy Ireland perhaps reflecting the inner turmoil of the characters. Is the rainbow a symbol of hope for Lewis and Joy?

I really enjoyed The Gravity of Love and found it a very compelling read. It shows how issues from the past must be resolved to be able move on in the present. The ending was unexpected but uplifting and perfect.

#Ten Things I want you to know about me, dear reader

Thanks to Lina at Black & White Publishing for inviting me to take part of the tour and for my copy of the book. The Gravity of Love is available now in paperback and as an e-book. At the time of writing, the Kindle version is only 99p and I recommend you get yourself a copy at such an amazing price. Click here to order: The Gravity of Love