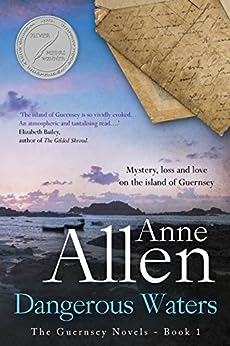 I’m really pleased to be taking part in the blogtour to celebrate all of Anne Allen’s Guernsey novels. I have read a couple of them and very much enjoyed them, particularly the last one The Betrayal. (You can read my review of The Family Divided here and The Betrayal here.) If, like me, you have recently been to the the film version of The Guernsey Literary and Potato Peel Pie Society, and it put you in the mood to visit Guernsey, you also have the amazing opportunity to win a two-night break to the beautiful island.

Today I’m taking you back to the start with a extract from book 1: Dangerous Waters

Jeanne stepped out on deck as the spring sun broke through the clouds. A warm glow spread across green and gold jewel-like Herm and its big sister, Guernsey, patchworked with fields and granite buildings.

The salt-laden air enveloped her like an old, trusty coat. Taking a deep breath, she closed her eyes and was a child again, playing on the beach with her parents. The image was so powerful that tears formed and she blundered, unseeing, towards the railings.

As her vision cleared she found herself staring at Herm and, without warning, was overwhelmed by such a strong feeling of fear that she had to hold onto the rail. Jeanne’s heart began to race, blood pounded in her head and her breathing came in short, painful gasps. Oh my God, what’s happening to me? After all this time, please, not again! Struggling to breathe she was on the verge of passing out. Letting go of the rail she stumbled, crashing into a man walking past.

‘Hey, steady on! Look where you’re going!’ he shouted, grabbing hold of her to stop them both falling. ‘Overdid the dutyfrees, did you?’

Stung by his accusation, she took a deep breath before replying. ‘No…no. I just lost my balance.’ His hands gripped her arms so hard that she could already imagine the bruises.  ‘Hey, that hurts!’

His grip loosened and he guided her back to the rail. She clung on, filling her lungs with sea air.

Jeanne nodded. As the man stepped back she took in, through a still blurred gaze, dark brown hair, deep blue eyes and the muscled arms of a man unlikely to be a pen-pusher. Responding to his warmer tone, she managed a tight smile before straightening up and walking, unsteadily, to the starboard side.

What on earth was that? Is this what I can expect now? Perhaps I shouldn’t have come back. Not that I had a choice…The thoughts whirled around her pounding head and she shuddered as she leant against the railings as Guernsey came into full view. While the ferry headed towards St Peter Port harbour, it seemed as if she were approaching a strange, unknown country rather than the land of her birth. The whole of the northern sea front, from Les Banques into St Peter Port, had been transformed. Towering edifices of granite and glass replaced the remembered old, tired mishmash of warehouses, scruffy hotels and shops. With a gasp, she realised that even the elegant landmark of the Royal Hotel had been supplanted.

Wow! What’s happened? It was as if a natural disaster had occurred, flattening the old front and replacing it by buildings more reminiscent of London than of the parochial island of old. She’d never have thought that Guernsey would move into the twenty-first century with such a bang.

The dramatic transformation which lay before her seemed to Jeanne to be an echo of  the change in her own life and she felt a stranger here. She wished she had stayed in the familiar, dull Midlands town which had been her home these past fifteen years. For a moment the urge to remain on the ferry and return to England, without setting foot on the island, was overwhelming. Her face must have mirrored her inner turmoil as a middle-aged lady standing nearby asked, ‘Are you all right, dear? Only you’ve gone very white.’

‘I’m fine, thanks. Just not very good on boats.’

The older lady nodded her sympathy. ‘My Tom gets seasick too, has to fill himself up with beer or the odd whisky or two before he’ll set foot on a boat. Just as well I can drive or we’d be marooned on the ferry till he’s sobered up!’ She laughed.

‘Aren’t these waters supposed to be dangerous?’

Anne Allen’s fascinating book series, The Guernsey Novels, comprises six standalone novels. All the stories in her novel series, take place predominantly on the island of Guernsey and are linked by characters popping up from one book to another.

They provide an ongoing story of a ‘village’ spread, so far, over 6 years. Each book is standalone with fresh new lead characters with their own links to the German Occupation during World War 2, having an impact on the present.

The Guernsey Novels are a mix of mystery, family drama, and love story and influenced by the author’s love of the island where she spent many happy years. Guernsey itself is always a main character in the books, offering a gorgeous backdrop to all the sorrows, joys and tragedies she describes.

The Guernsey Novels are available from all leading bookstores:

About the Author Anne Allen

Anne Allen lives in Devon, by her beloved sea. She has three children and her daughter and two grandchildren live nearby. She was born in Rugby, to an English mother and Welsh father. As a result she spent many summers with her Welsh grandparents in Anglesey and learnt to love the sea.

Her restless spirit has meant a number of moves which included Spain for a couple of years. The longest stay was in Guernsey for nearly fourteen years after falling in love with the island and the people. She contrived to leave one son behind to ensure a valid reason for frequent returns.

By profession Anne was a psychotherapist but has long had creative ‘itches’, learning to mosaic, paint furniture, interior design and sculpt. At the back of her mind the itch to write was always present but seemed too time-consuming for a single mum with a need to earn a living. Now retired from the ‘day job’, there’s more time to write and Anne has now published six books in The Guernsey Novels series. She will be publishing her seventh novel later in the year.

Would you like to visit gorgeous Guernsey? Well, here is your chance to win a two-night trip to this beautiful island, courtesy of Anne Allen, author of the riveting book series, The Guernsey Novels. Click the link below to enter. (Please note this competition is not sponsored or organised by Portobello Book Blog.)