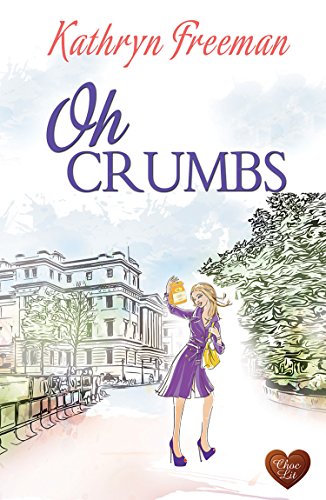 I’ve always enjoyed reading Kathryn Freeman’s books before and this was no exception. We meet Abby first as a thirteen year old at her mother’s funeral then later as a young woman going for a job interview at Crumbs biscuit company. In the intervening years she has put on her life on hold to help her dad bring up her four younger sisters. Life is never quiet or dull in the Spencer household but it hasn’t given Abby a whole lot of time to follow her own dreams. She arrives at the interview in a bit of a tizz, covered in crumbs from her young nephew George’s rusks (very appropriate), trips over her handbag and babbles a whole load of nonsense. Not quite the first impression she might have wanted to give her potential new boss, handsome managing director Doug Faulkner!

One thing I enjoy about Kathryn Freeman’s novels is that she writes about really relatable characters, You may not have been in the same situations but there is always something that you will recognise in them. The story of a personal assistant falling for the boss may not be a new story but it’s no less enjoyable, especially as Doug has secrets he is keeping from Abby.

I took to Abby from the beginning of the book. She has dedicated herself to her sisters and my goodness they could be a handful at times! I had to feel for her poor father, surrounded by all these young women with only young George to redress the balance – and Pat the dog of course. There was a lot of noise in the Spencer house but there was a lot of love and laughter too. I often found myself chuckling at some of the many times Abby let her mouth run away with itself , saying out loud exactly what she was thinking. It was great to see her grow as a character over the book as she finally was able to show her potential and make the most of opportunities. I wasn’t quite sure what to make of Doug at first and was slightly worried he might be a bit of a Christian Grey character! However, despite perhaps sharing some of Mr Grey’s talents (!), he was a much more caring character though tormented by a secret he felt compelled to keep and feeling very trapped.

Oh Crumbs was a thoroughly enjoyable read which had me laughing but also moved me on occasion too. It was a really charming romance story which left me feeling very uplifted. It would be good to read more about Abby in the future as I’d love to see how things develop both in her personal and professional life.

My thanks to Liz at publishers ChocLit for asking if I’d like to read a copy of this book. Oh Crumbs is available now as an ebook. You’ll find buying links for all ebook platforms on ChocLit’s website: Oh Crumbs

Sometimes life just takes the biscuit …
Abby Spencer knows she can come across as an airhead – she talks too much and is a bit of a klutz – but there’s more to her than that. Though she sacrificed her career to help raise her sisters, a job interview at biscuit company Crumbs could finally be her chance to shine. That’s until she hurries in late wearing a shirt covered in rusk crumbs, courtesy of her baby nephew, and trips over her handbag.

Managing director Douglas Faulkner isn’t sure what to make of Abby Spencer with her Bambi eyes, tousled hair and ability to say more in the half-hour interview than he manages in a day. All he knows is she’s a breath of fresh air and could bring a new lease of life to the stale corporate world of Crumbs. To his life too, if he’d let her.

But Doug’s harbouring a secret. He’s not the man she thinks he is.

Kathryn was born in Wallingford, England but has spent most of her life living in a village near Windsor. After studying pharmacy in Brighton she began her working life as a retail pharmacist. She quickly realised that trying to decipher doctor’s handwriting wasn’t for her and left to join the pharmaceutical industry where she spent twenty happy years working in medical communications. In 2011, backed by her family, she left the world of pharmaceutical science to begin life as a self-employed writer, juggling the two disciplines of medical writing and romance. Some days a racing heart is a medical condition, others it’s the reaction to a hunky hero…

With two teenage boys and a husband who asks every Valentine’s Day whether he has to bother buying a card again this year (yes, he does) the romance in her life is all in her head. Then again, her husband’s unstinting support of her career change goes to prove that love isn’t always about hearts and flowers – and heroes can come in many disguises.