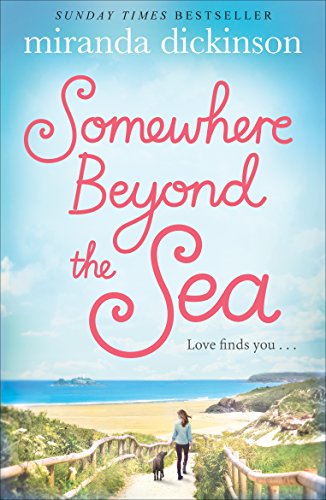 I’m a big fan of Miranda Dickinson’s writing and previously have reviewed A Parcel for Anna Browne (read my review here) and the prequel to this book, Christmas in St Ives (read that review here). Sometimes a book just captures your heart and this one with its mixture of sea, seaglass, stars and sky did just that.

The story is told in short alternating chapters by Seren (which is Welsh for star) and Jack. They are told in first person so you really feel you get to know them. And the thing is, although they are on opposing sides of a local community argument, you can’t help but like them both. Jack recently lost his wife, and home, and is bringing up their young daughter Nessie. He is a builder but work has dried up and money is tight. He jumps at the chance to work on big development. He is passionate about building, and wants to work with the landscape, with natural materials and to use local expertise. He feels he can respect and honour the memory of Elinor Carne, a local and largely forgotten astronomer.

Seren on the other hand is continuing her late father’s campaign to save the parsonage where Elinor lived, to protect and develop the old remains, bring the name of Elinor back into public knowledge. This is the site that Jack’s boss wants to redevelop. She is still grieving the close bond she shared with her father and trying desperately to keep his craft shop business afloat. The author lost her own father when writing this book so it’s not surprisingly that the grief Seren feels over the sudden loss of her dad is so touchingly and convincingly portrayed.

Unknown to either of them, despite being in opposition to each other, they also have something in common – seaglass. There is something special about seaglass and I also get that fizz of excitement if I find some on the beach. Jack and his daughter Ness enjoy making stars from seaglass on the beach but one day don’t have time to finish one. Seren finds the star the next morning and completes it. Young Ness is convinced it is mermaids finishing the stars!  It was lovely to read about how special the stars became for them all. It was something secret away from their everyday cares. This part of the story reminded me a bit of  You’ve Got Mail with neither knowing who the mystery person was.  Both Jack and Seren seemed to need someone or something else to complete their lives but effectively being enemies made it difficult for them even to be friends.

There were lots of lovely references to  everyday magic in the book and something that Seren’s father said to her really touched me:  “Magic is everywhere Seren, if you look hard enough for it. Life is extraordinary, if you let it be.” Somewhere Beyond the Sea is a really uplifting book about finding that magic in life, sometimes in the most unexpected places. I had a lump in my throat at the many poignant moments throughout the book and yet it also gladdened my heart. It was a joy to read.

Thanks to the publishers Pan Macmillan for my copy of this lovely book. It was published yesterday in paperback and ebook formats. It will be available from your usual book retailer or you can order a copy online here: Somewhere Beyond the Sea

Can you fall in love with someone before you’ve even met?

Seren MacArthur is living a life she never intended. Trying to save the Cornish seaside business her late father built – while grieving for his loss – she has put her own dreams on hold and is struggling. Until she discovers a half-finished seaglass star on her favourite beach during an early morning walk. When she completes the star, she sets into motion a chain of events that will steal her heart and challenge everything she believes.

Jack Dixon is trying to secure a better life for daughter Nessie and himself. Left a widower and homeless when his wife died, he’s just about keeping their heads above water. Finding seaglass stars completed on Gwithian beach is a bright spark that slowly rekindles his hope.

Seren and Jack are searching for their missing pieces. But when they meet in real life, it’s on the opposing sides of a battle. Jack is managing the redevelopment of a local landmark, and Seren is leading the community campaign to save it.

Both have reason to fight – Seren for the cause her father believed in, Jack for his livelihood. But only one can win. With so much at stake, will they ever find what they are really looking for?

Miranda Dickinson’s Somewhere Beyond the Sea is a sparkling tale of love, life and finding magic where you least expect it.

Miranda Dickinson has always had a head full of stories. Born in 1973 in Wolverhampton, she grew up in Kingswinford and dreamed of one day writing a book that would reach the heady heights of Kingswinford Library… Her first novel, Fairytale of New York (2009) was discovered on Authonomy.com – HarperCollins’ site for unpublished authors. Within three weeks of its release, Fairytale of New York had entered the Sunday Times Top Ten Bestsellers List, where it remained for five weeks – making it the world’s first crowd-sourced bestseller. The novel was also shortlisted for the RNA’s Romantic Novel of the Year Award 2010 at the Pure Passion Awards.

Miranda is a six-times Sunday Times Bestseller, with Fairytale of New York, Welcome to My World, It Started With a Kiss, When I Fall in Love, Take a Look at Me Now, I’ll Take New York, A Parcel for Anna Browne and Searching for a Silver Lining. Her new Christmas novella, Christmas in St Ives, is a festive treat and also a prequel to her ninth novel, Somewhere Beyond the Sea, which publishes in June 2018. She is an international bestseller in four countries and her books have been translated into fifteen languages. To date, she has sold one million books worldwide. She is currently writing her tenth novel.
Miranda lives in Dudley with her husband, Bob and daughter, Flo. She is also a singer-songwriter and recently released her first solo album, About Time.
Follow Miranda’s vlog at http://www.youtube.com/mirandawurdy and visit her website: miranda-dickinson.com
You can also follow Miranda on Twitter @wurdsmyth, on Instagram @wurdsmyth and on Facebook: MirandaDickinsonAuthor