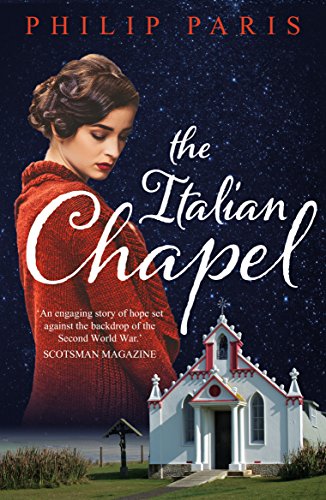 I visited the famous Italian Chapel in Orkney about 15 years ago but I have a feeling that it was either closed the day we went or being restored and not open to the public. So I am fairly sure that I have only seen its beautiful exterior. Philip Paris tells the story of how it came to be built by Italian prisoners of war on the small island of Lamb Holm during World War II. Having read the book and learned more about it, I am now very keen to go back again and see it through fresh eyes.

I must admit that I found the book a bit of a slow burner at first as the author spent some time setting the scene and introducing the characters. However, as I got to know the characters, I quickly found myself caught up in the story.

The book is, of course, based on a true story and I found the history of how the chapel was built by the Italian prisoners of war quite fascinating. Philip Paris mixes fact with fiction to produce a very readable account of how the building of The Italian Chapel came about. He includes characters who really did exist as well as creating some fictional ones. It was good to read at the back about what happened to the real men after the war, as well as learn that many of the incidents described in the book really did happen, even the more surprising ones. I was fascinated to learn that some of the materials  used to build the chapel were salvaged from the scuttled shops at Scapa Flow.

The book put a human face on life in PoW camps. I expect that the experience was probably not the same everywhere but I liked the camp commander Major Buckland. He recognised that nobody on either side wanted to be there and that all had to make the best of it. Forced together through circumstances, the Italian prisoners and their British captors developed trust and respect in their relationships with each other. They soon came to realise that enemies or not, they were all just people with friends and families, hopes and dreams.

A gentle, though forbidden, romance is woven through the story too. This romance was only discovered by chance by the author when he had almost finished the book and he felt he just had to include it. I’m glad he did. The secret literally built into the chapel means I definitely want to go back again to see it for myself.

An impeccably researched, enjoyable story, The Italian Chapel book celebrates love, perseverance and friendship while the building itself stands as a testament to the resilience of the human spirit under difficult circumstances.

Orkney 1942. Forbidden lovers, divided by war, united by a secret act of creation.

Amid the turmoil of the Second World War, a group of Italian prisoners is sent to the remote Orkney island of Lamb Holm. In the freezing conditions, hunger and untold hardships of Camp 60, this ragtag band must work together to survive.

Domenico, a talented artist, is among them. He inspires his comrades to create a symbol of peace during these dark days of war, and out of driftwood and scrap they build the Italian chapel: a beacon of hope and beauty in a world ravaged by war.

The chapel soon becomes a place of love, too. When Giuseppe, another POW, falls for local woman Fiona, he decides to hide a token of his love there . . . the secret of which is unveiled for the first time in The Italian Chapel.

Based on an incredible true story, this heartbreaking and inspiring tale tells of forbidden passion, lifelong friendships and the triumph of the human spirit.

2 thoughts on “The Italian Chapel by Philip Paris #review @bwpublishing”