I’m pleased to be joined by Thomas Paul Burgess today as he shares #TenThings he’d like his readers to know about him. The inspiration behind the story is particularly sobering – see his first point. His latest novel, Through Hollow Lands, is published today by Urbane Books. You can order a copy online here.

Every generation has claimed it. You know the kind of thing. ‘I remember where I was when I heard that John Lennon had been shot’; ‘…when JFK was assassinated’…when Houghton/Armstrong put the ball in the English / Spanish net.’

For many perhaps, the most iconic image that defined our zeitgeist was the unforgettable appearance of the Twin Towers under attack.

For me, this event contains a particularly personal resonance.

Because I remember exactly where I was on the morning of 9/11. I was in Newark Airport, NYC, preparing to board a plane to Las Vegas for the honeymoon trip of a lifetime.

Only later did I realise that a late change of plan perhaps saved our lives that day. Moreover, that the experience would provide the impetus for my current novel, ‘Through Hollow Lands’ (Urbane Press).

The proposed road trip with new wife Mary was to take us to San Francisco, Las Vegas and LA.

There was no little deliberation regarding the itinerary.

Where should we make our first port of call? Eventually, after much discussion and last minute re-booking, we chose Las Vegas over San Francisco.

Flying into Newark in the early morning of September 11th, we had to hurry to make the connection to LV.

On arriving, jetlagged, we collapsed into sleep. A telephone call from home in Ireland awoke us. Mary’s brother enquiring after our safety and urging us to switch on the TV set.

Unforgettably, there was the now instantly recognisable effigy of the smouldering twin towers.

Later, when more details emerged, it became apparent that the terrorists had been targeting for hi-jack, west coast flights (as they were more heavily laden with high-octane aviation fuel.)

In that moment, I realised that –had we chosen the San Francisco option – we would have been on board the doomed Flight 93 that was to tragically crash into a Pennsylvania field later that day.

With all flights grounded and rental car stock exhausted, the ensuing days spent trapped in the seeming purgatory of Las Vegas were to prove the most surreal of my life and afford a creative catalyst for my writing.

As a Belfast author, Moore was bound to come to my attention. I first read his ‘Emperor of Ice-cream’ and ‘The Feast of Lupercal’.  But it was ‘The Lonely Passion of Judith Hearne’ that really did for me! To this day I can think of no better example of a male author writing through the eyes his central character; as a woman. His investigations of human despair and frustration, constrained by the manacles of social conformity, are second to none. Graham Greene said that Moore was his favourite novelist. I had the immense pleasure of recently having my own writing referenced with his, by Belfast novelist Colin Bateman; “White Church, Black Mountain just sucks you in. Like Brian Moore given a make-over by James Ellroy. Excellent stuff.” 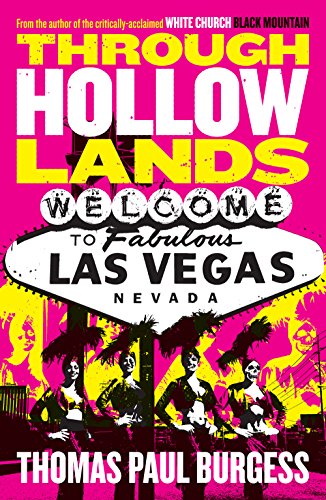 Set in the US on 11th September 2001, Through Hollow Lands tells the story of George Bailey, a charming but feckless opportunist who finds himself trapped in the seeming purgatory of Las Vegas.

He is followed there by Lou Plutus – his boss and a paedophile pornographer – from whom he has stolen a Kompromat video of great importance to the Russian mafia.

George un-expectantly encounters Jaffé Losoko there, a naïve, young Ethiopian woman whom he had got pregnant some six years before and arranged for an abortion. She now works in the Vegas sex trade.

To escape, George must face his Russian pursuers – the terrifying Triptych – head on and make amends to Jaffé. Beset by angels and demons, truth-tellers and liars, he must pay for the sins of his past in order to find salvation beyond Vegas.

The book explores the trauma visited upon the American psyche in the immediate aftermath of the 9/11 attacks.

Thomas Paul Burgess was born in Belfast, Northern Ireland. He is a published academic, novelist and songwriter / musician with his band Ruefrex – with whom he achieved commercial and critical success through the release of seven singles and three albums. His first novel, White Church, Black Mountain is a political thriller, dealing with the emerging post-conflict society of Northern Ireland and exploring the legacy of the troubles and how its residue impacts on those who seek to build a personal and communal future in their aftermath. Through Hollow Lands is his second novel. He lives in Cork, Ireland, where he is a Senior Academic and Director of Youth & Community Studies at The School of Applied Social Studies, University College Cork.