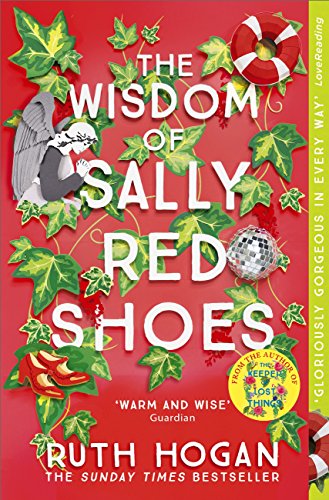 Well, what to say about The Wisdom of Sally Red Shoes? It is a book which could be terribly sad but instead is wonderfully warm and uplifting.

The Wisdom of Sally Red Shoes is full of memorable characters. There is Sally herself, of course, with her red shoes and red hat, her tendency to swear as a form of greeting and her fondness for feeding the crows in the graveyard. Kitty Muriel is determined to live her life to the full despite past sadness and is not afraid to try new things even at the age of 70. Masha is a mother who has never got over the loss of her infant son and practises drowning at her local lido, where she swims daily whatever the temperature. Another character seemingly separate from these main three is Alice. Alice is a single mother who dotes on her only child having also suffered great loss in the past. I couldn’t quite work out her link to the story then when it became apparent, I couldn’t believe I had missed it!

Masha works through her grief by thinking about dying herself, visiting her ‘other family’, the residents of Highgate Cemetery who she creates life stories for in her imagination, and considering becoming a cemetery guide. She is fascinated by the Victorian’s attitude to death. Death was a constant companion in the days before antibiotics and they had a much more practical approach. There was all kinds of advice on how to prepare for ‘a good death’, mourning photos of the deceased were not uncommon and of course they built grand cemeteries, places to come and remember their dead. Yet, as Masha knows, this did not mean they did not feel the losses as keenly as we do in today’s society, where death is almost an unspoken word.

What really spoke to me throughout the book was the quiet encouragement from the two older ladies to Masha and the wise words they gave to her about living life to the full, even after great loss. They showed by example that life is for living. I just want to share one piece of Sally’s wisdom which really moved me:

“When the music ends for someone you love you don’t stop dancing. You dance for them as well.”

Kitty’s words about being able to carry on with life after tragedy because she believed that the joy of being alive would eventually be brighter than the darkness of her loss left me with a lump in my throat. She was such a vibrant, exuberant woman that it was hard to imagine she had come through such sadness. And yet, this shouldn’t have been a surprise because which of us hasn’t suffered loss? The characters in this book are so fully rounded that of course they are going to have loved and lost and carried on, just like we do in the real world.

The Wisdom of Sally Red Shoes really is a wonderful read and a touching and uplifting story which I won’t forget. The characters will dance on in my mind for some time. I adored this tender-hearted book and you’d certainly be wise to get yourself a copy.

My thanks to the publishers, Two Roads, for my copy of this book through BookBridgr. The paperback version will be published next week on 6th September. It will be available from your usual book retailer and I really recommend a physical copy for that beautiful cover. However, I should mention that the Kindle version at the time of writing is only 99p which is an absolute steal. You can order a copy of that here: Sally Red Shoes

Once a spirited, independent woman with a rebellious streak, Masha’s life has been forever changed by a tragic event twelve years ago. Unable to let go of her grief, she finds comfort in her faithful canine companion Haizum, and peace in the quiet lanes of her town’s lido.

Then a chance encounter with two extraordinary women – the fabulous and wise Kitty Muriel, a convent girl turned magician’s wife turned seventy-something roller disco
fanatic, and the mysterious Sally Red Shoes, a bag lady with a prodigious voice – opens up a new world of possibilities, and the chance to start living again. But just as Masha dares to imagine the future, her past comes roaring back …

Like her bestselling debut, The Keeper of Lost Things, Ruth Hogan’s second novel introduces a cast of wonderful characters, both ordinary and charmingly eccentric, who lead us through a moving exploration of the joy of friendship and the simple human connections that make life worth living. 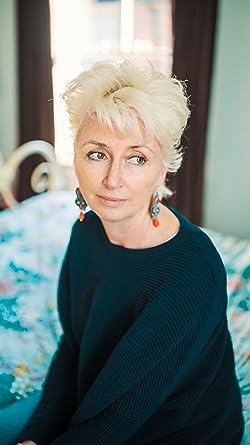 Hello dear readers, please allow me to introduce myself…

I was brought up in a house full of books, and grew up with an unsurprising passion for reading and writing. I also loved dogs and ponies, seaside piers, snow globes and cemeteries. So of course, I was going to be a vet, show jumper, Eskimo or gravedigger.

Or maybe a writer…

I studied English and Drama at Goldsmiths College, University of London where I hennaed my hair, wore dungarees and generally had an amazing time. And then I got a proper job. For ten years I had a successful if uninspiring career in local government before a car accident left me unable to work full-time and was the kick up the butt I needed to start writing seriously.

It was all going well, but then in 2012 I got cancer, which was bloody inconvenient but precipitated an exciting hair journey from bald to a peroxide blonde Annie Lennox crop. When chemo kept me up all night I passed the time writing and the eventual result was THE KEEPER OF LOST THINGS, my first novel, which was published in January 2017, and has now been selected as a Richard and Judy Book Club pick.

My second novel, THE WISDOM OF SALLY RED SHOES, published in May 2018 and you can order the book now.

I live in a chaotic Victorian house with an assortment of rescue dogs and my long-suffering husband. I am a magpie; always collecting treasures (or ‘junk’ depending on your point of view) and a huge John Betjeman fan.

My favourite word is ‘antimacassar’ and I still like reading gravestones.