I have a very special guest post for you ahead of Noir at the Bar Edinburgh next Wednesday 5th September. If you haven’t been to Noir at the Bar before, let me explain a little about it. Noir at the Bar takes place in several towns and cities now. Over the course of an evening, you have the chance to hear several crime writers, usually local, read from their work. There is also often the chance to hear from up and coming or unpublished writers. If you are lucky, you may even win a copy of one of the books being read from.

Today I have a post from Rebecca McKinney, one of the authors taking part in Noir at the Bar at the Canon’s Gait in the Royal Mile in Edinburgh next week. If you can get to Edinburgh on Wednesday, why not come along? It’s free and a great way to hear lots of different authors in a very friendly atmosphere. 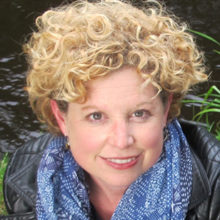 Many thanks to Joanne for giving me this space to talk about my latest novel, which I am describing as a ‘psychic noir’ story set in Edinburgh. It’s a foray into a new world for me, so coming up to my first reading at Noir at the Bar, I feel like I have invited myself to the cool kids’ party. I’m stepping out of my established genre in public for the first time and I’m strangely nervous about it.

My first two novels, Blast Radius (2015) and The Angel in the Stone (2017) are realistic literary fiction spiked with rather a lot of existential angst. After the publication of The Angel in the Stone, I decided to experiment with something completely different. It’s not a literary career change, but perhaps a new sideline with a suggestion of guilty pleasure about it.

I am attracted to stories that delve the dark, inner depths of the human mind, as readers of my previous books will have noticed. Taking this a bit further, I wondered what I could do with a character who has the ability to enter other people’s heads: to feel what they feel, to see inside their skulls. What would it be like to be able to do that? How would you live with other people? What would you do with that power? Would you use it to exploit others, or help them? What would you do if you met somebody else like you? It turns out, I had a lot of fun trying to answer these questions. The draft of a novel, with the working title of Siren Song, tumbled out in a few short months, and rarely have I enjoyed writing so much!

Enter my two protagonists: Harrison Jones and Amy Bell. Harrison Jones is a telepath. By day, he is a lecturer in social anthropology at Edinburgh University. However, he moonlights as a private detective, tracking down missing people who have been written off by the police. Amy Bell is a paramedic and veteran of both the Territorial Army and a troubled Belfast childhood. She’s also a psychic in denial: haunted by premonitions of events that she’s unable to prevent.

Harrison and Amy meet by accident one dark night on North Bridge, and establish an unlikely but progressively close friendship. In Siren Song, Harrison has been hired to track down a young singer who has disappeared after becoming alienated from her wealthy family. Amy persuades Harrison to let her help with the investigation, and so begins their psychic detective partnership. This first outing takes them from Edinburgh to Greece and back, and into the murky world of human trafficking. It’s crime fiction liberally inspired by Dr Who.

Siren Song is still a work in progress, and I don’t yet have a publication route for it (though any offers will be gratefully considered!). It doesn’t fit precisely within the crime genre, nor is it quite so far out there as to be called fantasy, so psychic noir is my newly-coined descriptor. It’s dark, mystical and funny in places. It also has a political twist, as well as a frisson of ‘will they, won’t they?’ sexual tension. I hope it’s a good read. Whatever happens to the book, I am thrilled to be able to entertain you with a taste of it at Noir at the Bar: at The Canon’s Gait, Edinburgh, 5 September 2018, 7pm.

Well I don’t know about you, but I am certainly intrigued with the sound of Siren Song. I’m looking forward to hearing Rebecca read from it at Noir at the Bar next week and hopefully seeing it in print sometime soon.