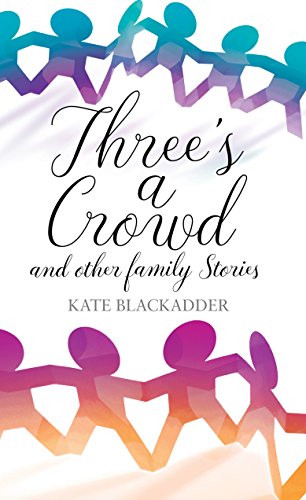 Three’s A Crowd is a lovely collection of 12 short stories by Kate Blackadder. A brief description of each story can be found further down the post. All were originally published in various magazines.

I particularly enjoyed the first story Class of 64 which was about a school reunion for a Marianne, fifty years after leaving school. Her grand-daughter Emily was having to come along and really not looking forward to it as you can imagine! However, Granny and her friends showed that you can have a great time whatever your age. Celia’s Surprise was a lovely story about a graduation and I certainly was as surprised as some of the characters when reading it! Are We Nearly There Yet? made me smile as it’s a phrase so many parents will be familiar with. In this case, young Abby is making the long trip with her mum to a new home on a Scottish island. It would be fair to say she’s not really looking forward to the move but her daddy has some surprises in store for her. The title story, Three’s a Crowd, is the last in the book and certainly made me smile. Young Toots is sent with her older sister on her dates with Bob with stern instructions from their mother not to let them hold hands. Toots can’t understand why her sister keeps asking if she knows what a gooseberry is: of course she knows it’s a sour fruit from the garden!

Three’s a Crowd is a great collection to dip in and out of when you have a spare ten or fifteen minutes. Each story is perfectly formed, which I always think is quite an art in a piece of fiction so short. There are stories to make you smile, plenty of twists in the tale and plenty of warmth and humour.

My copy was from a lucky dip at a Christmas lunch last year (sorry it’s taken me so long to get to it Kate!).  It is available in both ebook and paperback formats. You can order a copy online here.

Class of ’64 – Seventeen-year-old Emily is not looking forward to accompanying her grandparents to their school reunion but they have some surprises in store that change her mind.

Hide-and-Seek for Astronauts – when Julie is unable to give Ben the lavish seventh birthday party she’d planned, her sister Karen reminds her of the simple pleasures of their own childhood.

In my Dreams – a phone call startles the narrator out of a vivid dream that involved her much-missed mother, a pink fridge, a golden retriever pup, and Brad Pitt.

Celia’s Surprise – Celia has always gone her own way and been a worry to Simon but today it seems that she is anxious for his approval.

‘Are We Nearly There?’ – Abby and her mum are driving up through Scotland to get to the island that will be their new home, but Abby refuses to even look at the map her daddy has drawn for her.

The Generation Gap – At fourteen, Gabriella argues with her mother over most things but a revelation about her great-great-grandmother helps her decide her future.

The Night the Band Played – The Ceilidh Band is to play at the first post-war party in the village hall. Ten-year-old Alex schemes to get a chance to play on the piano accordion.

The New Eighteen – Ted is worried about his daughter Jess as she discusses her plans to go travelling on her own; her solution causes him even more disquiet.

New Tricks, Old Tricks – Meg may not be up to speed with the latest gadgets but she has a few old-fashioned skills that granddaughter Rosie and her friend are keen to learn.

Bicycles for Two – unexpectedly spending Christmas Eve with their great-aunts, Isabel and Joan have no expectation that the longed-for scarlet racing bikes will await them on Christmas morning.

Seeing Natalie – it should be Marty’s weekend to have their daughter but once again his ex-wife has come up with an excuse. However, this time Marty is optimistic that things are going to get better.

Three’s a Crowd – it’s 1951 and Mum has promised Toots a treat if she tags along with big sister Jane and her boyfriend Bob wherever they go.

Kate Blackadder was born in the Scottish Highlands but now lives in Edinburgh. She has had around 50 stories plus three serials published in women’s magazines. In 2008 she won the Muriel Spark Short Story Prize, judged by Maggie O’Farrell, and she’s been long-listed for the Jane Austen Short Story Award. Wearing her other ‘hat’ she works two days a week for a museum publishing house, and in her spare time she likes reading, going to the cinema, history, and crying over the television programme Long Lost Family. She blogs at http://katewritesandreads.blogspot.co.uk/

Stella’s Christmas Wish is her first full-length novel, published by Black and White Publishing in November 2016. She has published three of her magazine serials on Kindle – The Ferryboat, The Family at Farrshore and A Time to Reap – and three collections of previously published stories, Three’s a Crowd and other family stories; Another World and other stories; and The Palace of Complete Happiness and other stories.

She has a story in two Alfie Dog Fiction anthologies: A Wish for Christmas and ‘Came as me, left as we’.