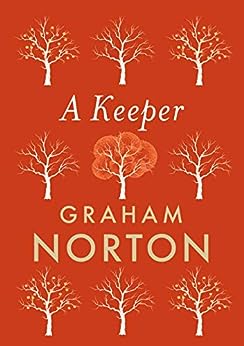 With his latest novel, A Keeper, Graham Norton proves that not only that is he one of the nation’s most popular presenters, but that he’s a blooming good writer as well.

Elizabeth Keane has returned to her childhood home in Buncarragh following the death of her mother. She left many years before for New York and had put her early childhood behind her. Not that she had a bad childhood, but as the only daughter of a single parent in small town rural Ireland, life was perhaps not the easiest. She expects to do nothing more than complete the legal formalities then head home. This all changes when she discovers a small pile of romantic letters from the father she never knew to her mother. She decides that she must find out a bit more about him before she returns home. As she begins to discover more about her parents’ life, we also hear from her mother Patricia in chapters entitle ‘Then‘. They paint a rather different picture than that which the heartfelt letters suggest.

This is such a well-written book. Graham Norton moves between Now and Then revealing just enough each time to make you want to keep reading. The story in the past reflects what Elizabeth is starting to uncover in the present, but adds so much more to what was really going on. As well as coming to terms with many revelations about her parents, she also has a lot going on in her own personal life to contend with which is very stressful when she is thousands of miles from home.

Only when you are reading the book do you realise the significance of the title. Secrets are closely kept throughout by so many characters and there is another meaning to the word ‘Keeper‘ too which I can’t reveal or it would spoil some of the plot.

A compelling read, A Keeper is full of suspense and atmosphere, disappointments and revelations. It’s also a really interesting exploration of mental health issues and overprotective mother/child relationships. There may be darkness in this book but ultimately, it provides a hopeful ending.

My thanks to the publishers for my copy of the book via Netgalley. A Keeper will be published by Coronet Books (an imprint of Hodder Books) in hardback and as an ebook this Thursday 4th October It will be available at your usual book retailer or you can order a copy online here: A Keeper

Dear Lonely Leinster Lady,
I’m not really sure how to begin . . .

The truth drifts out to sea, riding the waves out of sight. And then the tide turns.

Elizabeth Keane returns to Ireland after her mother’s death, intent only on wrapping up that dismal part of her life. There is nothing here for her; she wonders if there ever was. The house of her childhood is stuffed full of useless things, her mother’s presence already fading. And perhaps, had she not found the small stash of letters, the truth would never have come to light.

40 years earlier, a young woman stumbles from a remote stone house, the night quiet but for the tireless wind that circles her as she hurries further into the darkness away from the cliffs and the sea. She has no sense of where she is going, only that she must keep on.

Graham Norton is one of the UK’s best loved broadcasters. He presents The Graham Norton Show on BBC1, has a weekly show on BBC Radio 2, and writes a column for the Telegraph. He is the winner of eight BAFTA awards. Born in Dublin and raised in West Cork, Norton now lives in London.

His debut novel HOLDING was a commercial and critical success, winning Norton the Irish Independent Popular Fiction award at the Bord Gáis Irish Book Awards in 2016.

5 thoughts on “A Keeper by Graham Norton #review @coronetbooks @hodderbooks”