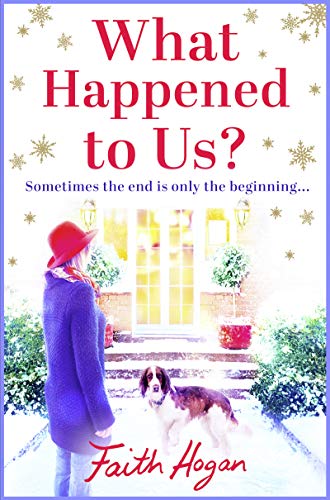 I am a big fan of Faith Hogan’s writing having read and really enjoyed all her previous books. Despite the wintry looking cover this isn’t a Christmas book as such, although some of the book does take place around Christmas time. I think it’s a book you can read and enjoy at any time of the year.

When Kevin reveals he has been having an affair with a beautiful Colombian woman, Valentina, Carrie can’t help but wonder ‘What Happened To Us?‘. The book follows them in the months following their split and, unusually I think, includes the points of view of both main characters. As the joint owners of a successful Dublin restaurant, The Sea Pear, the two had to work together closely which must be a difficult thing when a relationship has broken down.

Kevin seems to have been the archetypal fool blinded by the beauty and attentions of a younger woman. He was also blind to what a good woman he had had in Carrie. Even though all his friends were quite shocked and tried to share their concerns about his new relationship, he seemed blinkered to any of Valentina’s faults. As the cracks began to show in their relationship, he still didn’t want to admit to his foolishness. It really was hard to feel sorry for him at all.

Carrie is not however the archetypal woman scorned. After her initial devastation and shock at Kevin’s betrayal, she soon realises that actually, the love had fizzled out of their marriage a long time before their split. Much to Kevin’s surprise she begins to create new opportunities for herself and I was cheering her every step of  the way.

I was getting a bit concerned towards the end as to exactly how the story would resolve but I’m pleased to say that it left me with a smile on my face. I had even started to feel a bit sympathy for Kevin after all!

With Faith Hogan’s trademark exploration of her characters’ emotions, What Happened To Us is a gentle and quietly absorbing story of second chances and new beginnings.

My thanks to  Jess at Aria Fiction for inviting me to take part in the blogtour and for my copy of the book via Netgalley. What Happened to Us? is available now as an ebook from the following retailers:

Carrie Nolan is devastated when she is dumped by Kevin Mulvey after more than a decade without even a backwards glance! On reflection, she has sacrificed her own long term happiness establishing their critically acclaimed Dublin restaurant and pandering to his excessive ego.

Meanwhile Kevin can’t believe his luck. Valentina, their new waitress is a stunner, the kind of girl that turns heads when she walks in a room and surprise, surprise she has chosen him! He is living the dream!

Carrie seeks solace from a circle of mismatched friends who need her as much as she needs them. Jane, who struggles to run the pub on the opposite side of the street, Luke, who has stopped drifting while his father settles in a nearby nursing home and Teddy, a dog who asks for nothing more than the chance to stay by Carrie’s side.

With Christmas just around the corner, all is not quite as it seems and a catastrophic sequence of events leads to the unthinkable…

How far do you need to fall before you learn the true value of family and friends? And is it ever too late to start again…

Faith was born in Ireland and currently lives there with her husband, four children and two fussy cats. She gained an Honors Degree in English Literature and Psychology from Dublin City University and a Postgraduate from University College, Galway. She was a winner in the 2014 Irish Writers Centre Novel Fair- an international competition for emerging writers. When she’s not writing, she’s an enthusiastic dog walker and reluctant jogger.