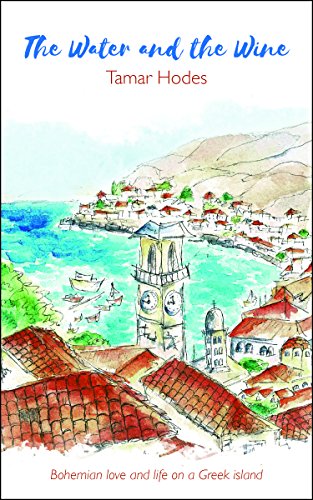 I’m pleased to be joining the blog tour for The Water and The Wine today. I have an extract for you which features Leonard Cohen and his lover Marianne. First though, a few brief thoughts from me.

The book is about lots of creative people living in an artists’ community on island of Hydra. And by artists I mean painters, writers, musicians etc, people from all areas of the arts. There are lots of characters to get your head around, some based on real people. It did take me a while to feel I knew who was who, especially since who was with who seemed to change one regular basis!

The author has created an evocative picture of the beautiful surroundings, the boats on the sea, the flowers, the wildlife. It seemed a realistic depiction of the Bohemian and hedonistic lifestyle. Freedom for some of the community meant not being bound by rules or responsibilities. But can this kind of lifestyle really work for everyone? With so many egos to appease it seemed not so easy to live and let live.

The Water and The Wine gives an interesting glimpse into what life was like on Hydra at this significant period of time and with this eclectic mix of creative people.

One time, Leonard fingered the scar on Marianne’s stomach.

‘What’s this?’ First thing, his voice was even more gravelly than usual.

‘When Axel and I were in Athens, I had appendicitis and had to have an emergency operation.’

‘Primitive. The place was very basic and they hung up sheets so that I couldn’t see what was going on. Axel sat by my bedside and typed on little pieces of paper. The first time I was able to go to the bathroom on my own, in the room there were small sheets of paper hanging up to be used and they were Axel’s writing. The nurses had not realised the masterpiece he was writing.’

‘So I’m sorry, Leonard, but I am not perfect or unblemished.’

Leonard ran his fingers gently across her scar and looked at the sunlight trying to slip its brightness through the shutters. ‘It is only when there is a crack that the light can shine through,’ he said.

Some mornings, he awoke really early to work on his novel and would leave Marianne sleeping. She would awake, turn to look at the dent in the bed where he had lain and stroke that space with her hand. Sometimes he left her signs of love: a poem entitled Breaking the Wish-Bone:

and underneath a drawing of a chicken wishbone snapped in half and the words Poem for Marianne. Another time, he wrote her a cheque, a real one, and the recipient was Marianne Ihlen and the signature was Leonard Cohen but where the sum of money should have been there was a drawn heart. One another occasion, a silver mirror and a note: you are more beautiful than anyone else so look at your face as often as you can. He also gave her a tortoiseshell comb, mottled, its teeth sharp.

No-one had ever treated her with such love and kindness and her eyes filled with tears at his affection. She could hear him, tapping away at his typewriter and was pleased that he had the fresh gardenia to spur him on.

She would not disturb him when he wrote but wait until later to thank him for his kind gestures.

‘You are everything I desire,’ he would whisper. ‘I have a woman and a table and a typewriter and the sunlight. I wish for nothing more.’

Sometimes Leonard and Marianne would look at themselves in the mirror that hung in the hall and see their reflections: her, blonde, small-breasted, and him dark-haired, slender and think: how could any people be that lucky in love?

But when the light was bad and darkness fell, they searched for their reflections in the flat, black surface and could not find them.

It is the 1960s and a group of young writers and artists gather on the Greek island of Hydra. Leonard Cohen is at the start of his career and in love with Marianne, who is also muse to her ex-husband, Axel. Australian authors George Johnston and Charmian Clift write, drink and fight. It is a hedonistic time of love, sex and new ideas. As the island hums with excitement, Jack and Frieda Silver join the community, hoping to mend their broken marriage. However, Greece is overtaken by a military junta and the artistic idyll is threatened.

Growing up, Tamar Hodes’ neighbours were Leonard Cohen, his girlfriend Marianne, and other writers and artists on the Greek island of Hydra. Her parents took her to the island to pursue their own art and writing. However the bohemian nature of Hydra destroyed their marriage. The Water and the Wine is a fictional account of those days.;Tamar Hodes’ first novel Raffy’s Shapes was published in 2006. She has had stories on Radio 4 and others in anthologies including Salt’s The Best British Short Stories 2015, The Pigeonhole, Your One Phone Call, the Ofi Press, MIR online and Fictive Dream. Tamar was born in Israel and lived in Greece and South Africa before settling in the UK. She read English and Education at Homerton College, Cambridge. For the past thirty-three years she has taught English in schools, universities and prisons.