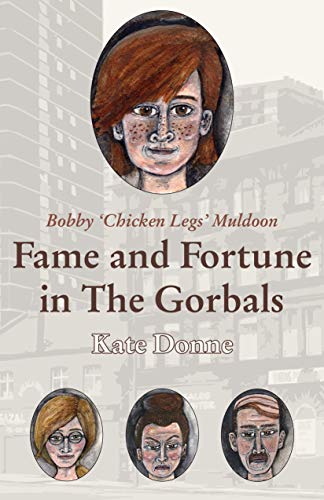 Mention The Gorbals to most Scots and they will immediately think of the infamous area of Glasgow known for gang violence, poor housing and high unemployment before much of the housing was cleared and the area regenerated in the late 20th century. Fame and Fortune in the Gorbals follows young Bobby Muldoon (also known as ‘Chicken Legs’) in the third book of Kate Donne’s trilogy, in 1960s Glasgow.

This short book is written largely in dialect, which could prove something of a challenge for non-Scots. Having been brought up on a diet of Oor Wullie, The Broons and Rab C Nesbitt, I enjoyed the dialect and it meant I could really hear the characters in my head. The book shows a side to the Gorbals which is often forgotten: that the area was populated with lots of decent hard-working folk all doing their best to get by.

Bobby is such an endearing character. Although only 16, he seems very mature. He can sense the difficulties in his parents’ marriage and is very much an ally to his dad against his mother’s nagging and rage. He is in love with young Jeannie, who is just about to start training as a nurse and he is hoping to become a bricklayer’s apprentice. The young couple have plans, hopes and dreams – high ambitions it seems for a couple so young.

There are quite a few chapters which will resonate with readers and bring back memories such as family parties where you made your own entertainment and simple holidays at Scottish coastal resorts such as Rothesay enjoying fish and chips, ice-cream and the shows.

It maybe seems a bit daft to read the last in a trilogy without having read the other two but as is often the case, this wasn’t an issue. The book is very much focused on young Bobby and his aspirations and although he mentions a couple of things which must have happened in the previous books, I didn’t feel at any point that I couldn’t follow the story.

Overall, this was a very enjoyable read. As I said, perhaps a bit challenging to non-Scots but I think that the anyone who can understand the narrative will love the character of Bobby and be cheering him on, particularly towards the end when it seems that fame and fortune may come his way. I have to say it couldn’t happen to a nicer young man.

Extract from chapter one: Ructions at The Reillys

Bobby is about to meet his girlfriend’s family!

‘Naw Jeannie. Jist leave me. Ah’ll be oot in a minute…’

Ah let er in an she sits beside me oan the lavvie flair.

We try tae nip oot withoot onybody seein us, but it disnae happen. When we get tae the front door Jeannie’s da is there, waitin fur us.

‘Jeannie, ah’d like a wee private word wi Bobby. Can ye gie us a minute pet?’

Jeannie starts laughin. Ah’m confused, cos tae me it wis anythin but funny.

‘Auntie Sadie’s a pain in the neck. She’s a trouble maker. They call er the Gab o the Gorbals, ayeways talkin aboot somebody. Ah’m no worried er shoes ur ruined.’

‘See! Ah telt ye it wid be awright. An by the way… ees right… ye dae make me happy. C’mon Bobby. Let’s no sit in an be miserable? Thur’s a new film oan at the pictures. If we hurry we’ll catch the start? It’ll cheer ye up?’

It’s 1969 and Bobby, as he is usually known, has spent the last year dealing with one crisis after another. He’s a Gorbals’ boy though so with sheer determination and a witty sense of humour he’s moving on. Thanks to some carefully considered action plans and the support of Jeannie, the love of his life, Bobby has so far overcome every obstacle in his path. Now he and Jeannie have a plan to create a good life for themselves. Will Bobby finally become a confident, successful young man? Or will he go one step further and find…
Fame and Fortune in The Gorbals?

She graduated from the Royal Conservatoire of Scotland, Glasgow with a BA Degree in Dramatic Studies and was awarded The Dorothy Innes Prize, The Arnold Fleming travelling scholarship and The Charles Brooke memorial prize.

Kate has spent many years involved in the arts and has been a professional singer, a director of musical theatre and an actress in many plays and musicals. Her poetry has been published in various anthologies and she was shortlisted for The Tarbert Book Festival writing competition 2017 with her short story Frae a Haggis.

One thought on “Bobby ‘Chicken Legs’ Muldoon: Fame and Fortune in the Gorbals by Kate Donne #review & #extract @donnekate #lovebooksgrouptours”