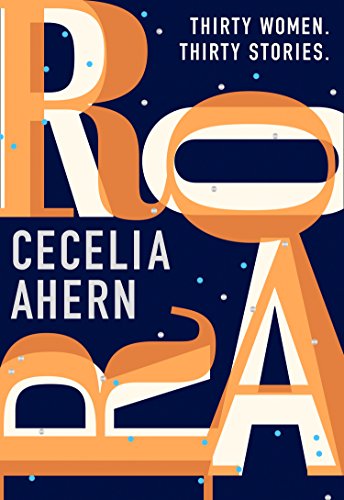 Roar is a fascinating and unusual collection of short stories from Cecelia Ahern. All begin with the title The Woman Who and it is a really eclectic mix from everyday and familiar tales, to more bizarre or unusual situations.

In many of the stories, Cecelia Ahern looks at women’s experiences in quite innovative ways, for example in The Woman Who Was Pigeonholed where women were literally put in a specific box even though they all protested there was more to them than just one label. She sometimes turns things on their head as in the marvellously named The Woman Who Guarded Gonads which looks at who should decide on a man’s reproductive health and rights. It shows the ridiculousness of the current situation for many women across the world. I really couldn’t see men standing for it if the situation was reversed.

The story which really resonated with me was The Woman Was Swallowed Up by the Floor and Who Met Lots of other Women Down There Too. When I was younger I was really shy about speaking in front of other people and suffered from the dreaded blushing. Having to give a presentation was a nightmare, so I could really empathise with the woman giving a presentation and just coming to a tongue-tied halt. It made me giggle to read about all the other women who fell down the hole to Cringeville. I’m sure many of us will have experienced the things that caused the women to want to fall through the floor, from the skirt tucked in the underwear returning from the loo, to a more revealing wardrobe malfunction by the pool, to sending an email to the wrong person, to asking when the baby is due to someone who isn’t pregnant… Best of all though, was the fact that the women all found the courage to stand tall, face up to whatever had happened and start again.

I found it quite fascinating that all the women protagonists were unnamed. I felt this was a powerful reflection of the way women can sometimes feel faceless or nameless, and not recognised as an individual. There was a sense of the powerlessness woman can sometimes feel, the irritation at just being lumped together and not considered as an individual. But it also made me feel a connection with many of the women, a sense of a common or shared experience.

Roar is a book which will challenge you, inspire you, make you think and yes, just maybe make you want to roar. Roar at the injustices faced by women, roar at stereotyping, at casual everyday sexism, at inequality, but also roar with pride at the strength and resilience of women.

My thanks to Emilie Chambeyron at Harper Collins for my copy of the book and inviting me to be part of the blog tour. Roar is available now in hardback from your usual book retailer or you can order a Kindle copy online here: Roar The paperback will follow next May.

I am woman. Hear me roar.

Witty, tender, surprising, these keenly observed tales speak to us all, and capture the moment when we all want to roar.

Cecelia Ahern is one of the biggest selling authors to emerge in the past fifteen years. Her novels have been translated into thirty languages and have sold more than twenty-five million copies in over forty countries. Two of her books have been adapted as major films and she has created several TV series in the US and Germany. She and her books have won numerous awards, including the Irish Book Award for Popular Fiction for The Year I Met You in 2014. PS I Love You was awarded two Platinum Awards at the 2018 Specsavers Bestsellers Awards, for UK and Ireland.

Cecelia lives in Dublin with her family.