Living History and In the Blink of an Eye

As a reluctant historian (until In the Blink of an Eye I’d only written contemporary fiction) I’m only just starting to discover some of the unexpected rewards of writing a historical novel.

At first it was all uphill. Despite being totally captivated by the story of my heroes Hill and Adamson https://alibacon.wordpress.com/writing/  and their involvement with early photography, it was difficult to immerse myself in the unknown waters of Victorian Edinburgh and then there was the constant worry of getting something wrong, irritating a knowledgeable reader and throwing them out of ‘the fictive dream’.  This happens in contemporary fiction too but how much easier would it be to mess up in a time I just wasn’t part of?

With the book done and dusted, I’m reconciled to slip-ups being unearthed (only one so far!) but I’m also uncovering a deeper layer of satisfaction brought about by my sojourn in the past. It began with suddenly having a set of historical reference points I didn’t have before. Any time an aspect of Victorian Britain is being discussed, I find I can relate it to events I know. Some were of course germane to my story (Disruption of the Church of Scotland, building of the Scott Monument) but with these things set (oops) in stone, other things fall into place around them. Corn Law Reform? Ten yeas before my novel begins. Great Exhibition? Falls in the middle of my hero’s story and came close to being part of it. Publication of Jane Eyre? I can pinpoint that book exactly in its context. History is suddenly more meaningful.

So I learned a lot, but over and above that, writing about real people and events has provided a sense of continuity. While a fictional character ‘dies’ with the end of his/her fictional journey my characters existed – and in a sense still do – outside my novel. There are other people who care about their achievements and who want to preserve their work and their memory.  In 2016 I went to the St Andrews Photography Festival and found a whole bunch of such people, many of them involved in research of their own, who thought of my characters in much the same way I did.  ‘Poor Chattie,’ said one fellow attendee with a deep sigh and we both fell silent in contemplation of that girl’s sad fate. Suddenly I was no longer a lone writer but part of a family!

Then there are the photographers still using ‘legacy processes’ i.e. continuing the work of Hill and Adamson and their successors so that it survives in both physical and digital form. And there are many other individuals and organisations in the world of art- and photo-history whom I contacted with the intention of promoting the book, who in the end I simply joined in celebrating the people we both admire. One of the biggest thrills was my appearance at Dunfermline’s Outwith Festival, where an audience member introduced himself as a direct descendant of one of my characters – present and past collided right in front of me.

Finally, there are places where I can still inhabit the world of my characters, especially in St Andrews. I was a student there but now I find it vested with the added significance of being home to the Adamson family. I also found myself quite emotional in Edinburgh recently as I realised my own journey’s end (pizza restaurant on North Bridge prior to book launch at Blackwells!) provided a prefect view of most of the locations I had used on my fictional (or factional) journey, including Calton Hill, home to D. O. Hill. Returning home to the South West, I contacted the current owners of Rock House http://rockhouse-edinburgh.com/ , now a beautifully preserved holiday let. They were keen to have a copy of my book for their guests, surely the ultimate homecoming for In the Blink of an Eye. 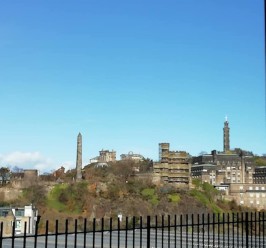 So if this is history, I am thrilled to be part of it. 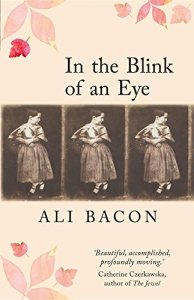 In the Blink of an Eye, a fictionalised biography of artist and photographer D. O. Hill available in e-book or paperback: https://www.linen-press.com/shop/in-the-blink-of-an-eye/