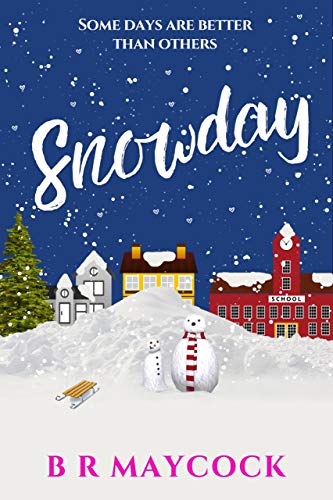 I have to admit that I always love when my kids get a snowday off school or, as is now the case, Uni. It happens so rarely here beside the sea that we always have fun out making snowmen or going for walks in the snow and then there is all that lovely hot chocolate to enjoy when we get back home again. So this novella from B R Maycock definitely appealed to me, while I wonder whether we will get snow again this year. At around 180 pages, you have plenty of time to squeeze this festive read in before the big day.

The story begins when rather frazzled mum, Eloise, wakens to a snowy day and discovers that while one of her three children has a ‘snowday’ from school, the other two don’t and neither does she! What follows is a rather madcap journey through the next few weeks towards Christmas as Eloise finds she has rather lot of romantic possibilities all of a sudden, one of which is her ex-husband Gary! She has been single for a while and used to coping, even if only just coping sometimes, with the demands of work and childcare with little input from Gary who is in a new relationship. All of a sudden, he seems to want to have a lot more to do with the children and Eloise isn’t sure she is happy with that. However, not one, not two but three other men all seem to be interested in Eloise at the same time so she really is spoiled for choice and completely confused!

Snowday is a fun-filled fast-paced rom-com with plenty of laugh-out loud moments and parts where you will be cringing on behalf of Eloise and wondering what on earth she is thinking about! But there are more serious parts too, looking at the reality of life as a working parent, the compromises needed at Christmas time when a marriage has split up but above all, the importance of being with those you love. Eloise is a character that I really warmed to and I hope we find out more about what happens to her and her lovely family in future books from BR Maycock.

Now read on for an extract from the book where the main character Eloise gets a phone call which does not fill her with festive joy!

‘I hope you don’t mind but we’ve decided we’d like a family Christmas this year,’ her mother said somewhat tentatively. Eloise’s heart stopped. Her mother never wanted a family Christmas. Like clockwork, her family disappeared off to Florida each year, mentioning it in passing but very obviously hoping she wouldn’t come.

‘Is everything okay? Why aren’t you going to Florida? Is Dad okay?’

‘Why can’t you speak louder, Eloise? I can barely hear you!’

‘I’m in work, Mum. And everyone is listening in on my conversation.’ There was giggling around the office, including David, who was sitting on Martin’s desk, chatting to him. Their camaraderie would have been nice to see any other time but Eloise was too worried.

‘Why did you ask is Dad okay and not me? For all you know I might have found out some bad news but I may have been braving telling you myself.’

Eloise cocked her head to one side. ‘Is that what’s happened? Are you okay, Mum?’

People in the office promptly moved, looking embarrassed. There were a few mouthed ‘sorry’s.

Her mother went quiet for a minute. All Eloise wanted was to hear her dad speaking in the background. She had the most terrible feeling that it was him and not her strong hardy mum.

‘Well, no. It seems I never booked the flights,’ her mother said. ‘But before you say anything or talk about putting me into a home, I did book them. I did them with your brother on that stupid computer but the internet went and then he rushed off without finishing it and so I kept on clicking but it turns out I didn’t book anything.’

Eloise sighed with relief. ‘Did you not have a confirmation email? Did you not check your bank account?’

‘Well no, Aunt Rose rang and told me that her daughter…’

‘My cousin Sally,’ Eloise interrupted, unable to stop herself grinning. Her mother always pretended that their family were somehow not actually related to them.

‘Yes, anyway, she’s pregnant.’ Her voice lowered. ‘From this top computer engineer who’s saying it’s not his. Sally is devastated. Apparently she did it to trap him.’

‘She actually said the words “this will make him marry me”.’

Put that way, it did sound a bit like entrapment. ‘And how are they all? What are they doing for Christmas?’

There was silence on the other end of the phone. Eloise laughed. ‘Mum. Are they going to Florida?’

‘Your aunt is such a copy cat!’ her mother cried. ‘The second she heard we were going again this year she said we’d reminded them that they needed a holiday too, you know, because she’s so busy with work.’ A huge source of contention in their house. Eloise’s mother was the only stay-at-home mum and had regularly been laughed out of the place for declaring that people who raised children at home should be paid as they were raising the workforce of the future. It didn’t go down well in a house made up of mostly females who did the working mum thing with gusto.

‘So now they’re going and you’re not? Look, maybe it’s good you have the break this year.’ But not with me, she thought, shuddering at the idea of being ordered about and complained at. ‘Do you want to put me on to Dad?’

‘Eloise, I was in the middle of telling you something important.’

‘Mum, I can’t hear you. I’ll call around to you and we can discuss this Christmas thing.’

‘We don’t need to discuss anything except where the Christmas thing, as you so nicely put it, is being hosted. Who’s cooking? Me or you? Will Gary be there? Will the kids be there?’

Eloise felt the room spin. Why hadn’t her mother assumed that Eloise would automatically have the kids? And then she remembered, Gary and Disneyland Paris. She felt her gut twist even more.

‘There’s no reason the kids wouldn’t be with me. I look after them. I’m the primary caregiver.’ She felt the strength that seemed to amplify her voice and she caught people around the office looking over. ‘Can I say hi to Dad and then I have to get back to work. And you need to stop ringing me here, Mum. It’s unprofessional.’

‘Yes, I’m sure the head of the cardboard company is going to get bent out of shape because of you being on the phone.’ She laughed. ‘Do you get it? Bent out of shape?’

Her mother made some grumbling noises and there was a moment of muffled speaking before Eloise’s dad spoke.

‘So, Lou, what you up to?’ Her dad always thought that was hilarious. The difference was, she laughed at her dad’s jokes and not her mum’s. She felt guilty about it, but it was engrained, and wasn’t likely to change anytime soon.

‘Nothing much, just selling boxes,’ she said, as always.

‘Company hasn’t folded yet, then?’ her dad asked, his glee audible.

‘Still in good shape,’ Eloise said, smiling too. It only ever took a few minutes of speaking to him to calm her down.

Thanks to the author for my copy of the book. Snowday is available now as an e-book and you can order a copy from Amazon UK here or from Amazon.com here.
From the back of the book

Eloise is too busy juggling the chaos of three kids, an ever present ex-husband and a demanding boss to even remember the last time dating crossed her mind.

But as soft snow falls silently all around, romance twinkles with the flakes.

After being single for so long, Eloise suddenly has a lot of choices. Too many choices. Will anyone be worthy of melting the guard around her heart to let love in?

When Bernadette Maycock isn’t dreaming up vibrant leads for romantic comedies, she’s ingesting books for her blog (https://brmaycock.wordpress.com/), in particular chick lit (her first love!) books, romantic comedies and thrillers. She can also be found playing footie or watching Marvel, DC or Star Wars movies and cartoons in Co. Westmeath, Ireland with her brilliantly out there husband, Keith, and their four epic little men.

Her debut ‘It Started With A Snub’ and Christmas romantic comedy ‘Snowday’ are available now on Amazon, and Bernadette is currently working on a three part series about AbbeyGlen Village, whose luck is about to change …

She has one goal and that’s simply to make readers smile and/ or laugh (a splutter rates highest;)).