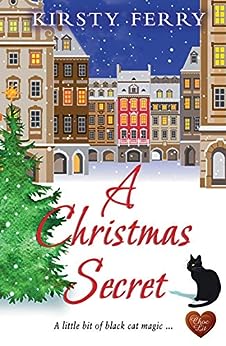 I do enjoy Kirsty Ferry’s writing and when I heard that this Christmas novella was set in Edinburgh, well how could I resist? The author has been very busy this year as this is one of two Christmas stories being published. I thoroughly enjoyed the other one too. You can read my review of that here: Watch for Me at Christmas Even though it says ‘perfect for cat lovers’ in the publicity, which I’m sorry isn’t me, I very much enjoyed this story.

Hugo is house sitting and cat sitting while his sister Nessa is off in America with her author husband. He decides to take her cat, Schubert, for a pet portrait photo shoot for Christmas as a gift for Nessa. It’s there he meets Isla and, of course, there is an attraction between them. While out for a quick drink after the photo shoot, someone from Hugo’s past appears and threatens to spoil any thoughts Hugo might have of a relationship before it even gets started.

Ah lovely Hugo – I think I’m definitely a little bit in love with him. He had a mis-spent youth which he’s now put behind him and he’s definitely on the straight and narrow. I actually felt rather protective of him when his potential happiness is threatened by some from his past – who unexpectedly is also connected to Isla. Isla is a lovely character who has been badly let down in the past. Hugo and Isla are a couple you really want to see happy – preferably together – and you will be hoping throughout the story that they will overcome any obstacles and get together.

And Schubert, well, what can I say about Schubert? Well don’t even think about calling him a moggie! I’m not really a cat lover but I thought he was a wonderful character. He was wise and more than a little manipulative with maybe a hint of a witch’s familiar about him. One of the highlights of the book was an absolutely hilarious scene at the Christmas markets in Edinburgh. In the area round the ice rink and festive attractions at St Andrew Square, Schubert manages to cause havoc and creates quite a scene. What happens would liven up any visit to ‘Edinburgh’s Christmas’ and really had me giggling away.

A Christmas Secret is such a heartwarming read for this time of year. I loved the references to myths and legends about the Holly King and the Oak King and how Kirsty Ferry wove those into the story. This magically romantic novella is just the perfect length to squeeze in and help you relax in the busy run-up to Christmas. I am sure it will leave you with a smile on your face and feeling a festive glow. I am also sure that Schubert will be purring away happily at the outcome of his escapades!

What if a secret from Christmas past was stopping you from moving on to Christmas future?

When Hugo McCreadie steps into Isla Brodie’s pet portrait studio to get a ‘Festive Furball Photo Shoot’ for his sister’s cat Schubert, he does question his sanity. But he knows the photographs will be the perfect Christmas present for his eccentric sister, Nessa – and he finds himself quite taken with ditzy, animal-loving Isla Brodie, too.

Will a Christmas secret from long ago prevent Hugo and Isla’s new friendship from going any further? Or will a certain big, black cat taking matters into his own paws lead them not only on a mad winter dash through snowy Edinburgh –but into each other’s arms for Christmas as well?

Linked to Every Witch Way but can be read as a standalone novella. Her timeslip novel, ‘Some Veil Did Fall’, a paranormal romance set in Whitby, was published by Choc Lit in Autumn 2014. This was followed by another Choc Lit timeslip, ‘The Girl in the Painting’ in February 2016. ‘The Girl in the Photograph’, published in March 2017, completes the Rossetti Mysteries series. The experience of signing ‘Some Veil Did Fall’ in a quirky bookshop in the midst of Goth Weekend in Whitby, dressed as a recently undead person was one of the highlights of her writing career so far!
Kirsty’s first timeslip novel ‘The Memory of Snow’, commended in the Northern Writers’ Awards, is set on Hadrian’s Wall, with the vampire tale ‘Refuge’ set on the Holy Island of Lindisfarne. She has also put together a collection of short stories, a non-fiction collection of articles and writes Gothic Fiction under the pen name Cathryn Ramsay.
Kirsty has had articles and short stories published in Your Cat, Peoples Friend, Ghost Voices, The Weekly News and It’s Fate, and her short stories appear in several anthologies. She was a judge in the Paws ‘n’ Claws ‘Wild and Free’ Children’s Story competition in 2011, 2013 and 2014, and graduated from Northumbria University in December 2016, having achieved a Masters with Distinction in Creative Writing.
You can find out more about Kirsty and her work at http://www.rosethornpress.co.uk, catch her on her Facebook AuthorPage, follow her on Twitter @kirsty_ferry or pop by her blog at http://www.rosethornramblings.wordpress.com.