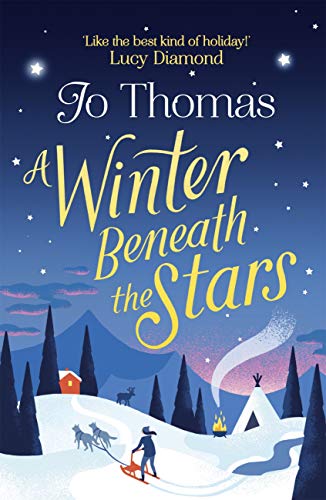 Jo Thomas’s The Oyster Catcher was one of the first books I ever read on my Kindle and I’ve had a soft spot for her writing ever since. So I couldn’t resist the invitation to join the blogtour for A Winter Beneath the Stars. It turns out that this is book #150 of 2018 and I am pleased that it was a book I really loved which helped me reach that significant number.

Halley is a courier personally delivering precious items. A mix up at an airport results in her bag being switched and to her horror she’s lost some precious wedding rings she’s supposed to be delivering for a wedding in Tallfors in Sweden. She works out from items in the bag she has that her own bag is probably with enigmatic Michelin chef Daniel Nuhtte. The only way to reach him, is to go with the equally enigmatic Bjorn as he herds his reindeer across the frozen Lapland countryside.

Jo Thomas is so brilliant at transporting you to a different place. Whether it’s the wet and windy West Coast of Ireland in The Oyster Catcher, the sunnier climes of Italy in The Olive Branch or snowy Sweden in this book, her attention to detail just makes it so easy to visualise the world her characters inhabit. In A Winter Beneath the Stars there was lots about the frozen landscape which she depicts as beautiful, of course, but also as a place where it can be difficult to survive. Halley learned about the importance of creating warmth with fire and a warm glow with candles. She learned too about not taking more than you need to survive from the natural environment. Although she was quite squeamish (as I would be!) about slaughtering reindeer, she understood the respect shown to the animals by using every part of them when they are killed. Traditions passed on through the generations meant wisdom from the past was not lost.

I loved this book and was with Halley and Bjorn every snowy step of the way. They were such strong and interesting characters. The book was as much about their own personal journeys of self-discovery as it was about the physical journey they were undertaking in real life. Halley in particular was strong, brave and determined even though she perhaps felt as though she was running from her past and not fully facing up to what had happened in her life. I was so happy for her when she realised that the best way to honour her past was to start really living in the present.

For me, the author has captured perfectly the importance of hanging onto love when you find it, as love is so precious. As Halley says, “we don’t know when we’re going to find love or lose it. But I do know that if we find it, we should make the most of it while we can.”

On a courier trip to Tallfors, deep in Swedish Lapland, everything is going to plan. Halley has her bag, with two precious wedding rings inside for delivery… until she doesn’t.

The only way to save the wedding is to team up with mysterious reindeer herder Bjorn, the one person who can lead her across the snowy tundra to be reunited with her bag.

On a journey of a lifetime beneath the stars, with only the reindeer and a bad-tempered stranger for company beside the fire, Halley realises that she will need to confront her past heartaches in order to let the warmth of love in once more…

Jo Thomas worked for many years as a reporter and producer, first for BBC Radio 5, before moving on to Radio 2’s The Steve Wright Show. In 2013 Jo won the RNA Katie Fforde Bursary. Her debut novel, The Oyster Catcher, was a runaway bestseller in ebook and was awarded the 2014 RNA Joan Hessayon Award and the 2014 Festival of Romance Best Ebook Award. Jo lives in the Vale of Glamorgan with her husband and three children.